Watch the embedded video here or visit our YouTube channel for this and other videos: https://www.youtube.com/watch?v=yCpYGQIZdDQ

Watch the embedded video here or visit our YouTube channel for this and other videos: https://www.youtube.com/channel/UCNGKdZiEJKwsoVzcEd9ZOgQ 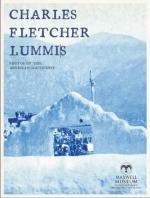 Watch the embedded video here or visit our YouTube channel for this and other videos: https://www.youtube.com/watch?v=PKAg-02TOGs

Click here for a copy of the pdf "Become a Superhero!"

Watch the embedded video here or visit our YouTube channel for this and other videos: https://www.youtube.com/watch?v=Mi4hLor4zMY

Dr. Carmen Mosley, Curator of Human Osteology at the Maxwell Museum of Anthropology

What We Do at the Maxwell Museum of Anthropology Part I: Curator Dr. Carmen Mosley

For a copy of the PDF version of this exhibition, click here

Watch the embeded video here, or visit our Youtube channel for this and other videos: https://www.youtube.com/channel/UCNGKdZiEJKwsoVzcEd9ZOgQ

Watch the embeded video here, or visit our Youtube channel for this and other videos: https://www.youtube.com/channel/UCNGKdZiEJKwsoVzcEd9ZOgQ

For a link to a PDF version of the exhibition Iconoclasm: Questions of Veneration and Destruction, click here.

COVID-19: Concepts of Sickness and Wellness

Museums are places where visitors encounter, explore, and engage with objects, ideas and topics that are new, familiar or challenging. And they are places where people can gather safely. In the face of the global Covid-19 (coronavirus) pandemic, the Maxwell Museum of Anthropology continues and extends our mission with an online exhibition about the current pandemic and different ways to know about it and look at it. We will be offering this information in partnership with many scholars, institutions and individuals with the goal to educate and add perspectives.

In July of 2019, following the decision by Whole Foods Market to sell green chiles grown in Pueblo Colorado, instead of chiles from New Mexico, Jared Polis, the governor of Co., set off a war of words with Michelle Lujan Grisham, governor of NM, regarding which state grows superior chiles.  This in turn has been inspiring memes on social media taking up the cause.

In addition to having some fun and coming up with our own meme, the Maxwell Museum of Anthropology wanted to wade into this fracas in order to observe the anthropological themes at play (e.g. community identity, commerce, social media, etc.) as well as to highlight the research of UNM Anthropology PhD candidate Holly Brause, who has been studying the chile in southern NM and Chihuahua for the last 5 years.

In Brause’s words: Nothing unites New Mexicans quite like our love of chile. In both its fresh green and dried red forms, New Mexican chile is an integral part of New Mexican cuisine, and a powerful symbol of New Mexican heritage and identity. Despite its cultural importance, the actual New Mexico chile industry has been losing ground (in acres planted) to Mexico since the passage of NAFTA, and increasingly, to other chile producing countries around the world. To add insult to injury, now Colorado boasts that Pueblo chile is superior to New Mexican chile. To combat such an audacious claim from our northern neighbor, in 2017 the New Mexican legislature added an emergency clause to a bill that created a new license plate that proudly proclaims New Mexico to be “The Chile Capital of the World,” after rumors circulated that Colorado was planning to release their own chile plates. Even while New Mexican chile producers continue their struggle to find a way to compete in a globalized marketplace, New Mexicans passionately defend the superiority of their beloved heritage crop against competitors and detractors, both foreign and domestic.

Our meme features the endangered Mexican Wolf, or Lobo, indigenous to the region that is now New Mexico, and mascot for the University of New Mexico. 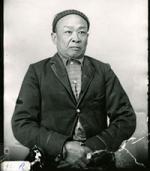 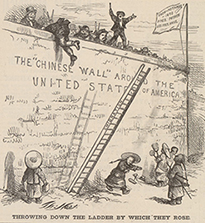 “Throwing Down the Ladder by Which They Rose,” by Thomas Nast, 1870

The exhibition, which was on view in the museum from February 2016 – January 2017, recounts the story of Chinese immigrants and Chinese American communities in New Mexico through photographs, documents and family heirlooms. The video available through the link below is an encapsulation of the exhibition, and a brief tour through this important but little known history and cultural aspect of New Mexico.

China Then and Now

Ceramics as a path to Chinese history and culture
Today, China looms large in America's field of vision. China's growing role in the world economy and world affairs is impossible to ignore. Through this online exhibit we hope to help New Mexicans (and others) gain an understanding of a civilization that, one way or another, increasingly affects their lives.
One way to understand China's present is to look at its past. In this exhibit we use Chinese ceramics as a path to a better understanding of Chinese culture, both ancient and modern. Many of the pieces you'll see online will be displayed in a gallery exhibit at the Maxwell Museum, between April 8, 2016 and September 2017. Almost all of the pieces come from a collection assembled by Albuquerque artist Eason Eige.