Visit our temporary exhibit in honor of Black History Month which will feature two new and original artpieces by folk artist Karen Collins, Founder & CEO of the African American Miniature Museum. In particular, the exhibit will feature a diorama of Blackdom, NM and one of archaeologist/rancher George McJunkin.

Also, don't forget to pencil in the date for a special lecture on Blackdom, NM, by historian Dr. Timothy E. Nelson on February 23, 2023, titled: "Blackdom, New Mexico: The Significance of the Afro-Frontier" free and open to the public.

Check back soon for more information and photos! 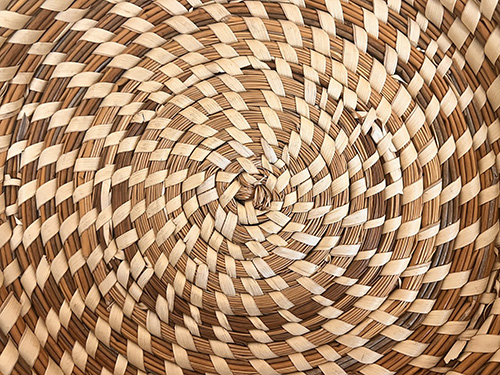 Click here to see all of the Gullah/Geechee baskets in the Maxwell Museum collections.

Conversing with the Land: Native North American Baskets of the Maxwell Museum Collection 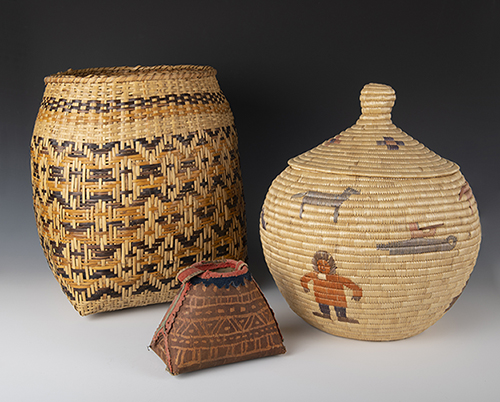 This exhibition celebrates Native North American basketry traditions as seen through the collections in the Maxwell Museum of Anthropology. On display are finished objects: works of artistry, complexity, beauty, and use. Behind each basket is a deeper story. Their stories connect us to the lands on which they were made and to the materials from which they were constructed, embedded with profound seasonal knowledges and long-standing commitments to nurture and protecting the land for future generations.
Baskets hold stories of techniques passed within communities over generations, and of skills honed through years of practice. We do not hear the conversations, prayers, laughter, and songs shared among basket makers and users, but they are also present in these objects. And each also tells of use and needs: to store, to carry, to gift, to celebrate, to mourn, to sell, to repair; and to purchase, collect, and display.
The lessons of these baskets and their makers are not solely of the past. They are also of the present and future. They are stories of survivance, persistence, pride, creativity, and of the ongoing work to protect the land and maintain knowledge in times of environmental and social upheavals. In this exhibition, we share some of these stories with you.

Find the labels for all of the baskets in the exhibition here.

We Were Basket Makers Before We Were Pueblo People 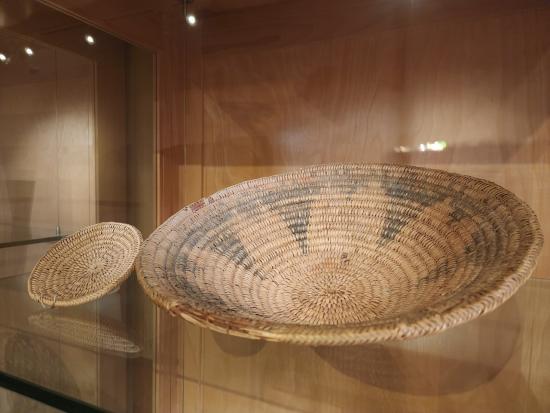 The group generously shared knowledge about the varied techniques, uses, and meanings embedded within these baskets, and together, with museum staff and guest co-curator Dr. Bernstein, they agreed to co-curate an exhibition presenting these rarely seen objects to the public. The result is "We Were Basket Makers Before We Were Pueblo People: Pueblo Baskets in Context" which is housed in the Alfonso Ortiz Center Gathering Space of the Museum.

Like the fibers that make up these intricate baskets themselves, the voices of the co-curators are independent powerful strands of understanding that come together to offer us a greater appreciation of the artwork and its signficance. Come see the exhibit which will be on display until January 10, 2024, in conjuction with our other temporary exhibit on baskets, "Conversing with the Land: Native North American Baskets of the Maxwell Museum Collections."

This exhibit is in part sponsored by the Alfonso Ortiz Center for Intercultural Studies.

In the Places of the Spirits: Photographs by David Grant Noble 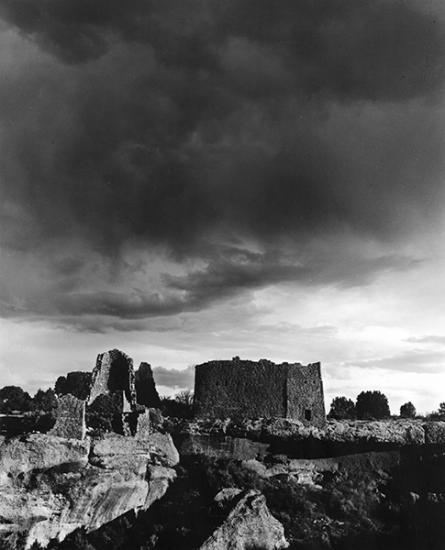 In early May 2022, the Maxwell presented a new exhibition in our Center Gallery featuring photographs from our archive. The exhibition, titled In the Places of the Spirits: Photos of David Grant Noblem, was curated by Maxwell Archivist Diane Tyink and features a selection of stunning photographs from this new acquisition. The Maxwell is honored that this is one of only two exhibits in which Noble's work has been shown as a whole, as most of his photographs are dispersed in different galleries and/or publications. David Grant Noble is a photographer and writer whose focus is the history and archaeology of the American Southwest, though he has worked around the nation and around the globe.

David Grant Noble was born and raised in Massachusetts, attended Yale University, served in the army in Vietnam, and was for many years on the staff of the School for Advanced Research. While in the army in the 1960s, Noble photographed Vietnam's Central Highlands. These were his first photographs and were recently published in his memoir, “Saigon to Pleiku: A Counterintelligence Agent in Vietnam’s Central Highlands, 1962-1963.”  In 1970 and 1971, he photographed Mohawk ironworkers in New York City - some of those photographs featured in the Smithsonian Institution National Museum of the American Indian 2002 exhibition Booming Out: Mohawk Ironworkers Build New York, co-curated by the Maxwell's own Curator of Exhibitions, Devorah Romanek. Noble's work includes a series on Ojibwe wild rice harvesters in Wisconsin and Minnesota, followed by his work in the Southwest.

He became interested in photographing the Southwest’s ancient cultural landscapes in 1972-1974, when he was the photographer on the School for Advanced Research’s excavations at Arroyo Hondo Pueblo, near Santa Fe. This job soon led to his writing and illustrating his archaeological guide, “Ancient Ruins and Rock Art of the Southwest,” which, in turn, led to “In the Places of the Spirits.” He has authored or edited a dozen books on the deep history of the American Southwest.

Noble’s photographs are in many collections, including the Smithsonian’s National Museum of the American Indian, Yale University’s Beinecke Library, The New York State Museum, and the Heard Museum, in addition to the Maxwell Museum of Anthropology. Examples of his photography can be seen at his website. He lives in Santa Fe and is presently writing an archaeological murder mystery set in the Southwest.

This exhibit is sponsored by UNM's Alfonso Ortiz Center for Intercultural Studies.