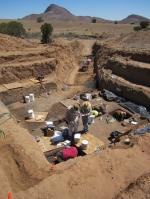 Office of Contract Archaeology Director Robert Dello-Russo has been conducting research at the Paleo-Indian site of Water Canyon near Socorro, New Mexico since 2001.  Dello-Russo and other archaeologists have recovered evidence of hunting activity dating from 13,000 to 9,000 years ago.  Materials include projectile points and other stone tools, along with bison remains ranging from Clovis (~13,000 years ago), Folsom (~12,000 years ago), and Cody Complex (~10,800 years ago), as well as later Paelo-Indian peoples (~9,200 years ago).   The site provides an opportunity to evaluate a wide range of research questions about the lifeways of these ancient inhabitants, including tracing the source of the materials used to manufacture the stone tools at the site.  Another significant question is how bison evolved—the site has yielded Bison antiquus bones, a late Pleistocene species that pre-dates the smaller, modern Bison bison.

In the summer of 2015, students from a UNM undergraduate archeological field school worked at the site.  The students learned how to excavate, document, and catalog the material. Dello-Russo is searching for graduate students to take back to the site for continued research.

Erin is examining the relationships between material culture and identity, between local and regional identities, and between producers and consumers. During the 19th century, frontier New Mexico consumer relationships were charged with more than just economic convenience and reflected important social networks that were essential to the survival of Hispanic settlements. These relationships played a vital role in the formation and maintenance of modern Hispanic identity through the tumultuous changes of the Mexican and American Territorial Periods. Accordingly, she seeks to examine artifacts from four 19th century Hispanic residences to understand consumer relationships residents maintained with Puebloans, Apaches, Anglo-Americans, and others in order to acquire and use New Mexican plain ware ceramics and other imported mass-manufactured goods.

Erin's research is supported by the National Science Foundation.