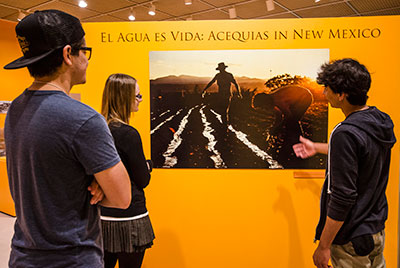 The northern New Mexican landscape as seen today was created by acequia irrigation and agriculture. Every colonial settlement that took root between 1600 and 1847 required the construction of ditches to channel water to grow crops and sustain livestock.  By 1700, an estimated 60 acequias, or ditches, were operating in New Mexico, followed by more than 100 acequias over the next one hundred years, with at least 300 additional acequias built in the 1800s.

El Agua es Vida: Acequias in Northern New Mexico portrays the fundamental role acequias play in the environment and in community in Northern New Mexico, where water is a precious resource of increasing scarcity. The exhibition uses a groundbreaking multi-disciplinary study conducted by researchers at the University of New Mexico, New Mexico State University, New Mexico Tech and Sandia Labs.  The study, funded by the National Science Foundation, investigates the importance of the acequia system of water delivery and management in generating, transforming and sustaining the landscape.

The water crisis of the 21st century is global. Many of the questions that concern acequia researchers have also been pursued by researchers working on similar systems in other parts of the world.