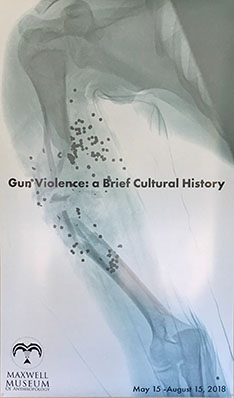 An X-ray of an shotgun wound to the upper arm. Image: Case courtesy of Dr. David Cuete, Radiopaedia.org, rID24457

Museums have played a role in the romanticizing of guns, which began with the earliest display of guns in European  “Cabinets of Curiosity.” For example, the 17th century Ashmolean collection in Oxford contained numerous firearms, including a musket of the Elizabethan period inlaid with mother-of-pearl and engraved with the heads of Roman emperors. The British Leverian collection in Westminster had early 18th century Turkish guns, and Napoleon III had a Prussian needle gun in his Cabinet of Curiosities. In the late 1800s, Augustus Henry Lane Fox Pitt-Rivers, founder of Oxford’s Pitt Rivers Museum, assembled a large collection meant to trace the evolution of firearms.  In the 19th century as museums collected the spoils of colonization, the collection and display of guns and others weapons increased. Military museums, built around armaments amassed for citizen militias and the national military, began housing and displaying enormous collections of guns.

American museums, particularly those that portrayed Western expansion, created exhibitions that glamorized firearms, with persistent themes including the “Kentucky” or “Pennsylvania” Rifle (long rifles), Colt revolvers, and armed outlaws who carried these firearms.  Such exhibitions celebrated a gun-slinging American frontier, based in part on historical events, in part on popular legends, and, in part on outright fiction. Museums have not been the only ones romanticizing guns, but their role in this process is undeniable.