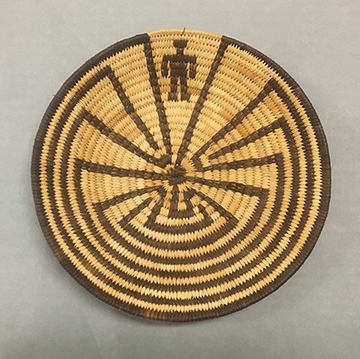 Tohono O’odham Man in the Maze basket, ca. First half of the 20th century, Maxwell Museum of Anthropology  Collection

The cultural ramifications of national borders have become an increasingly important topic in anthropology, mirroring the global importance of the topic in general.  Because New Mexico is on the U.S.-Mexico border, the politics of that border are deeply important to the state and its people.  The recent presidential election also made the border and immigration controversial issues.

In light of recent events and the long and complicated history of the U.S.-Mexican border, La Frontera examines border and immigration policies and realities from an anthropological perspective through the use of images of the border, objects – personal and political – related to the border, and personal reflections from people and organizations who are most directly impacted by the border and immigration policy.  We ask what the border means to different people, and what the border means to you.

La Frontera y Nuevo Mexico: The border and New Mexico is an anthropological investigation of the U.S. Mexican border in two parts, the first section currently on exhibition in the Maxwell is an introduction to the topic and the second section will be installed by January 31 in the Hibben Center, just south of the Maxwell. La Frontera is the latest in the Current Issues in Anthropology series of exhibitions. Presenting news media, historic documents, personal reflections and objects, the series presents thought provoking topics and requests feedback