Mexico at the Hour of Combat: Sabino Osuna's Photographs of the Mexican Revolution 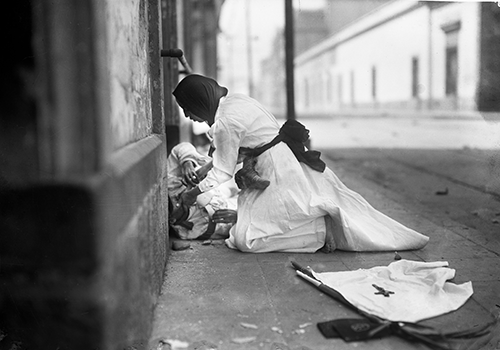 The Mexican Revolution began in 1910 with an uprising led by Francisco I. Madero against longtime dictator Porfirio Díaz. The Revolution is generally considered to have lasted until 1920, although the country continued to have sporadic outbreaks of warfare well into the 1920s. It gave birth to the Mexican Constitution of 1917.

A nascent generation of photographers documented the struggle. Sabino Osuna was among the photographers who appeared on the scene and was able to get close to the action. The images he produced cover primarily the early years of the Revolution, in particular the Decena Trágica. As nonpartisan observers, photographers covered the events and enjoyed the liberty of moving freely among the rival troops. They carried no weapons and posed no threat to the warring factions.

Fifty-six images selected for the exhibition come from the Osuna Collection of 427 glass negatives that are held in the University of California Riverside Libraries Special Collections & Archives. The Osuna collection is both historically important as well as visually impressive and coherent, presenting one ­person’s point of view.  The exhibition of the photographs is augmented with historic and contemporary objects related to the Mexican Revolution.