Return to Diné Bikéyah: The 150th Anniversary of the Signing of the Navajo Peace Treaty 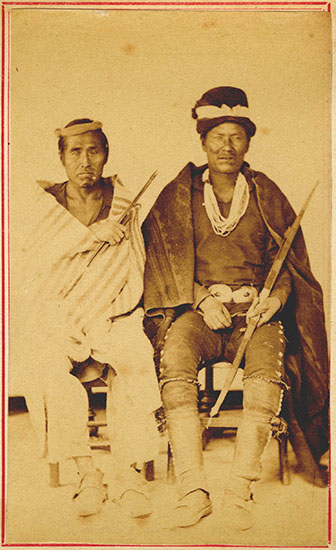 Diné, meaning “The People,” is how the Navajo refer to themselves.  The Diné comprise the largest Indigenous nation in North America. Diné Bikéyah, also known as The Navajo Nation, stretches across portions of Utah, Arizona, and New Mexico; at more than 27,000 square miles, it is larger than 10 of the U.S. States.

In 1598 the founding of the Spanish colony of New Mexico changed the lives of the Diné forever, marking the beginning of the often-violent changes brought by settler colonialism. In 1848 the U.S. Army arrived in New Mexico territory, and in 1864 the U.S. government forcibly removed the Diné from their homeland to an impoverished tract of land known as Bosque Redondo, in eastern New Mexico. This exhibition observes the 150th anniversary of the signing of the Navajo Peace Treaty, which took place on June 1, 1868, after the Diné insisted on being allowed to return home. The Diné are the only Native Nation to successfully use a treaty to retain their homeland.