Ask the Maxwell: Does the Maxwell have objects from the Roswell Crash Site? 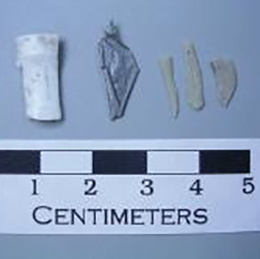 Abigail S. asks “Do you have any artifacts from the Roswell Crash site?”

Yes. And No. Or Maybe?  With approval from the Bureau of Land Management and funding from the SCI FI channel, in 2002 the Maxwell’s Office of Contract Archeology conducted archaeological testing and geophysical prospection at the location of the reported 1947 impact of a possible UFO on the Foster Ranch in Lincoln Country, near Roswell New Mexico. The goal of this research, the first comprehensive archaeological work in the location of the reported crash, was to search for any evidence of a physical impact or debris.  While the team reviewed 1947 reports and newspaper articles of the incident, OCA’s role was to identify and evaluate evidence at the location and not to evaluate the many versions of the Roswell story.

The final report prepared by OCA staff concludes as follows:

“To date, no clear evidence of a UFO crash, or of other reported events such as military activities has been found at the Foster Ranch site. Scientific investigation of the site is far from complete, however. In terms of archeological testing, excavation of more backhoe trenches—possibly in conjunction with more remote sensing studies—might be used to either discover or eliminate the possibility of a buried furrow. Continued higher spatial resolution metal detection survey might be productive as well. Finally, continued strip excavation of broad areas, such as that conducted in SU 17 in 2002 is likely to produce more artifacts that could attest to either a UFO impact, a military clean up, or the area’s known use: ranching.”

So yes Abigail, we have collections. We leave their significance to readers to judge.