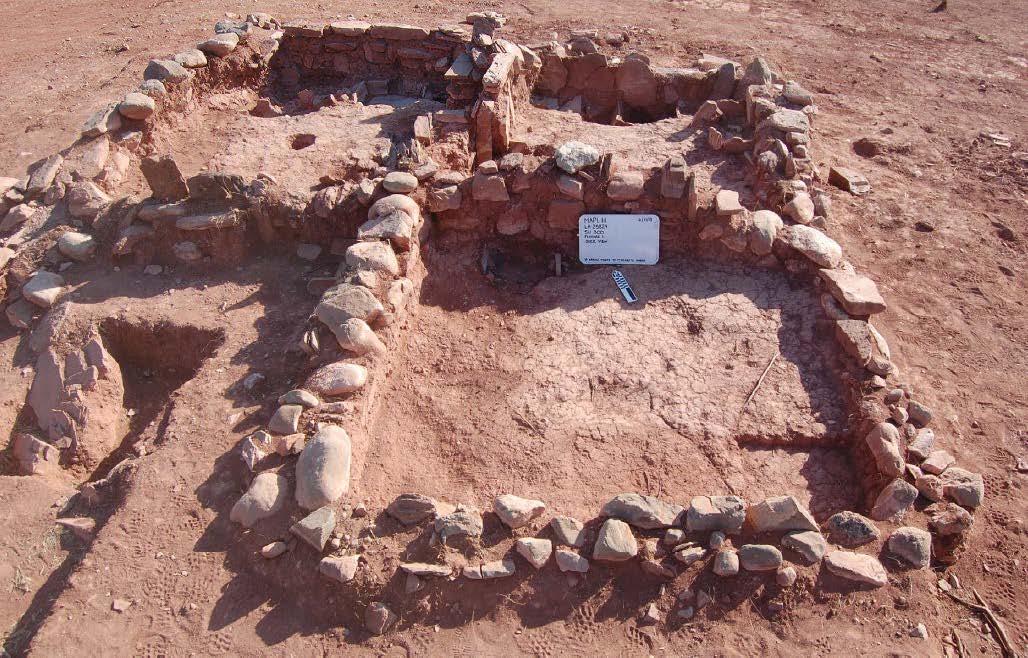 In April, the Society for American Archaeology held its first in person conference since 2019.  Maxwell Museum Archaeology Curator and Assistant Professor of Anthropology Dr. Kari Schleher presented a poster co-authored with first author, doctoral student Mariana Lujan Sanders and Assistant Professor of Anthropology Dr. Hannah Mattson on their ongoing research on two Ancestral Pueblo field houses (UNM 1 and UNM 7) on Diamond Tail Ranch near Placitas, New Mexico. Documented as part of the 2017 and 2019 UNM archaeological field school, these small settlements were part of the 15th-16th century pre-Hispanic agrarian landscape along the eastern flank of the Sandia Mountains. Both sites consist of single 2-3 room masonry and adobe structures with associated trash middens and external features. They are located about 3 miles south of Tonque Pueblo (1325-1600 CE) and north of Paa’ko Pueblo (1200-1600s CE) and Tijeras Pueblo (1313-1425 CE).

The study examined more than 2600 ceramic sherds from the two recently excavated sites as well as from two nearby field house sites previously excavated by the Maxwell’s Office of Contract Archaeology. Rio Grande Glaze Ware was the dominant decorated ceramic type at all sites. The ware is subdivided into 6 chronological types—termed Glaze A through F—spanning ca. 1300 to 1700 CE. Ceramic frequencies indicate that the most intense use of the field houses occurred between 1325 and 1450 CE. A more intensive analysis was undertaken of 228 rim sherds to attempt to identify where the pottery used by the residents of the field houses was made. This was done by identifying ceramic temper, or non-plastic inclusions added to the ceramic body, as potters working in particular production locales used different tempers during this period. High frequencies of hornblende latite ash tempers indicate that most of the pottery used at the sites was made in the Tonque Pueblo community.  The occupants of these fieldhouses were also connected to larger social networks, as some of their pottery came from further away, with the strongest connections to the Galisteo and Santo Domingo Basins.