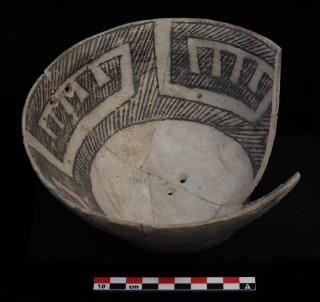 The Mancos Black-on-white pottery type is an enduring enigma in the central Mesa Verde region. It was produced from roughly A.D. 920–1180 and includes a wide range in variation in design and technology. During its production period, nearly identical designs were used across the broader Ancestral Pueblo world, including in the Cibola, Chuska, and Kayenta regions. In these latter regions, scholars have proposed finer chronological groupings based on changes in design styles, rim decorations, and paint type (i.e., mineral vs. carbon paint). In contrast, researchers in the central Mesa Verde Region have not defined finer temporal groupings.

They conclude their intriguing study by noting:

“Our results hint at the possibility that design styles within Mancos B/w are not just temporally significant, but may also reflect production group differences. We will continue to evaluate these design styles on Mancos Black-on-white to untangle this enigma.”

This research was supported by a grant through the Colorado State Historical fund, awarded to the Crow Canyon Archaeological Center.