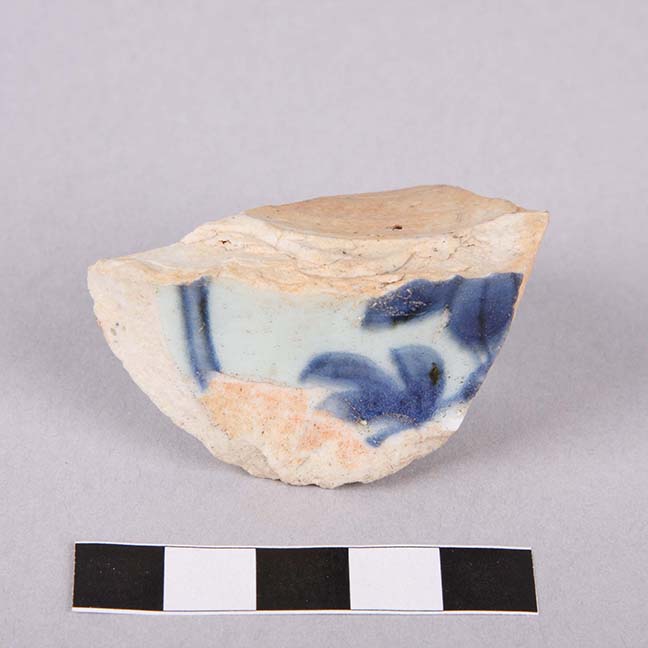 Today, we conclude our discussion of our recent research at San Marcos Pueblo by exploring the direct and indirect evidence of Spaniards at the Indigenous community of San Marcos. Historical documents suggest that a mission was established at San Marcos in 1638, and the footprint of that structure with a convento has been recorded archaeologically.  Are there other indications of Spanish presence at the Pueblo?

Only 14 Spanish manufactured artifacts were recovered during the University of New Mexico’s work at San Marcos, but those that were recovered give us a picture of Spanish impact on the settlement (Larson et. al 2017: Table 7.6). One interesting artifact is a small copper spoon (Figure 2) that was recovered from a midden in the middle of the town. This spoon shows evidence of reuse in that one edge has an asymmetrical shape as if it had been used as a scraper. Scraping had remodeled the symmetry of the spoon bowl. We suspect that indigenous residents repurposed the item for their needs. In addition to metal objects, small amounts of Spanish pottery were recovered. A total of five majolica pottery sherds were recovered from the site and were likely imported to New Mexico from production centers in Mexico.

In contrast to the very few majolica pottery sherds (Figure 1), many more colono ware sherds were identified. Colono wares, native-made pottery in Spanish forms, are an example of hybridity and reflect Native innovation in the face of colonization (Dyer 2010). Almost 100 fragments of colono wares were recovered by UNM from San Marcos, including fragments of soup plates and candle-holders. Figure 3 below is a photograph of  a colono ware soup plate found at San Marcos by Nels Nelson in the American Museum of Natural History collections.

Finally, we discovered evidence of metallurgy in the form of at least two smelters, clean out pits, and slag (the byproduct of smelting; Figure 4).  Both the smelter structure and the composition of the slag points to well established Spanish practices rather than indigenous experimentation (Vaughan 2017).

Although the Spanish artifacts are not numerous at San Marcos, it is clear than the Spanish had an impact—San Marcos native residents were active in the Pueblo Revolt against the Spanish missionaries and colonists that occurred in August of 1680 when the Spanish were successful  pushed out of New Mexico (until 1692). After the Pueblo Revolt, San Marcos was depopulated, with residents moving to other Pueblo communities in the area, especially Cochiti and Santo Domingo (Kewa) Pueblos, where descendants of San Marcos Pueblo live today.

Vaughan, C. David. 2017. Metallurgy and Its Consequences in the New Mexico Colony. In The archaeology and history of Pueblo San Marcos: Stability and Change.  Edited by Ann F. Ramenofsky and Kari L. Schleher, pg. 185-204. The University of New Mexico Press, Albuquerque, NM.