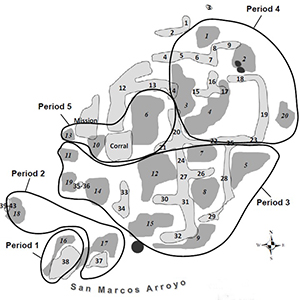 Today we continue our exploration of the University of New Mexico’s San Marcos Pueblo project (see Part 1 for an introduction to San Marcos Pueblo). In Part 2, we look at how the community grew and changed over time. Because the archaeological work at San Marcos was focused on the surface and didn’t include deep, stratigraphic excavations, we used the large collection of decorated ceramics found on the surface to look at how the community changed over time.

The primary method we used was seriation, which uses changes in artifact style or function to put them in a relative temporal order. We used this method with decorated pottery types to put areas of the site in a relative sequence of time (Figure 1). Figure 1 lists the all of the midden areas of the site by the relative amounts of each type of decorated pottery found in them. Because of previous archaeological work in the region, we already knew when each pottery type was made. Black-on-white pottery types were the first to be made at San Marcos, in the late 1200s and early 1300s. Then potters at San Marcos started making glaze-painted pottery types, which changed over time based on rim shape, with Glaze A rims earliest and Glaze F rims latest. Using this seriation and also correspondence analysis, we were able to show that there were 5 periods of use of the community by Pueblo people (Figure 2). The earliest use was in the southwest corner of the site, by a spring. The latest occupation was in the area around the Spanish Mission, in the northwest area of the community. The largest population was about 2,600 people in the early 1400s (Ortman 2017).

Next week, in Part 3 of 4, we will look at whether or not the glaze-painted pottery traditions changed over time at San Marcos Pueblo.