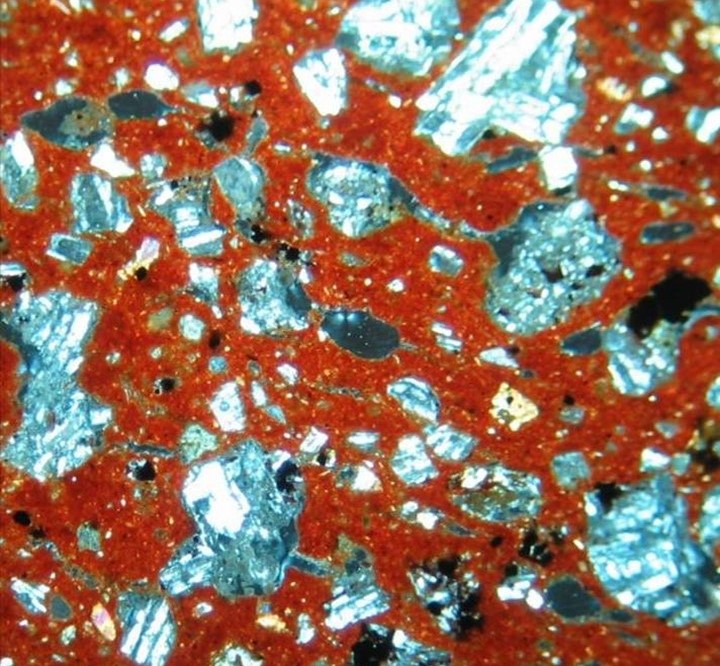 An example of a petrographic thin section of a pottery sherd made at San Marcos, showing the clay (in red) and the crushed rock added to the clay as temper (in gray/blue).

San Marcos Pueblo potters made beautiful glaze-painted pottery from the 1300s until the Pueblo Revolt of 1680. They used lead sources from the nearby Cerrillos Hills to create glazes. Unlike some contemporary pottery where glaze covers an entire vessel, San Marcos potters uses glazes to create  painted decoration. Pottery traditions reflect how a potter learned to make a pot. Changes in learning are therefore visible in the finished pottery. When we see changes in groups of pottery types over time, we identify changes in the lives of the potters in the community.

We conducted scientific tests of the pottery to look for changes in the materials used in their manufacture. Petrographic (or thin-section) analysis allows archaeologists to tell what materials potters added to their clay to improve strength and durability. Potters at San Marcos added the same type of crushed rock to their clay for 400 years! There were no changes in these materials the entire time potters made glaze-painted pots at San Marcos.

We used a different scientific test, electron mircroprobe analysis, to examine the chemical make-up of the glaze in order to discover the glaze paint recipe used by potters. We found that the recipe changed very little over the 400 years potters were making pots at San Marcos. We discovered a similar lack of changes in many of the other steps in the pottery production process at San Marcos, all suggesting incredible stability.

We concluded that this stability in pottery making, indicates that San Marcos pueblo potters continued their traditions, even when faced with Spanish intrusion into their lives and community. Potters here exhibited great resilience in the face of colonization.

So far, we’ve seen persistence of the community, even with the known presence of a Spanish mission. This begs the question of whether the Spanish were really a significant presence in this particular community or not? Next week, in Part 4 of 4, we will explore the direct and indirect evidence of Spaniards at San Marcos. Stay tuned!