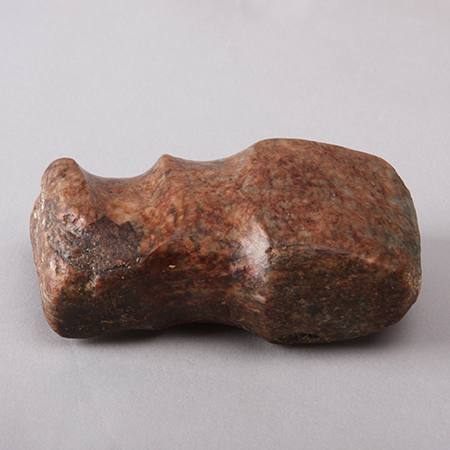 In 1976, the Maxwell Museum mounted a small exhibition of  ground stone axes and raw material samples that had been donated to the Museum by geologist Arthur Montgomery. These materials were of sillimanite (also called fibrolite), a distinctive glassy aluminum-silicate mineral formed in metamorphized rocks derived from aluminous clays. Distinctive notched sillimanite axes were made in Ancestral Pueblos in northern New Mexico from the AD 1300s-1600s.  Montgomery had identified sources of exceptionally pure, mineralogically and visually distinct sillimanite in the Truchas Peaks area near Cundiyo, New Mexico and not far from Pecos Pueblo, an important center of axe production and trade.

Montgomery had operated the Harding pegmatite mine in Taos County during WWII and from 1949-1958. He subsequently taught at Lafayette College in Pennsylvania. (The mine, which Montgomery donated to the University of New Mexico in 1978, is listed on the State Register of Historic Places and is the focus of current archaeological documentation by the Maxwell’s Office of Contract Archeology).

Montgomery collected raw material samples and axes from a variety of locations throughout New Mexico, as well as from private collections, and donated his carefully catalogued collection to the Maxwell in 1975.