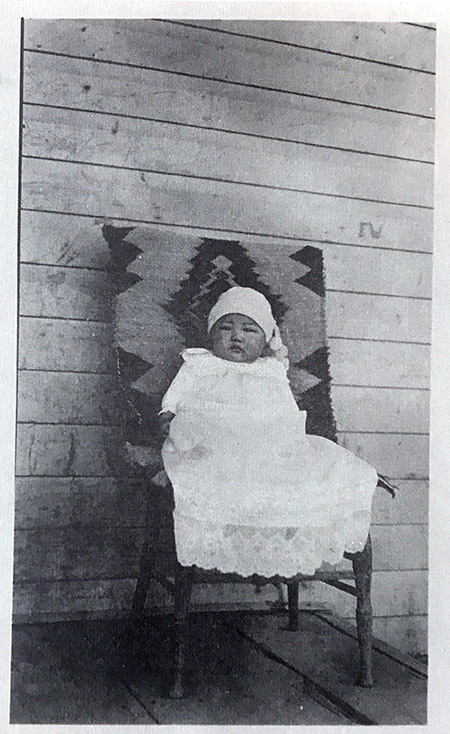 In the nearly 50 years since the Maxwell Museum of Anthropology has been in its present location, the Museum has hosted approximately 150 temporary exhibitions. In recognition of Asian and Pacific Islander American Heritage Month, this month we feature Maxwell Museum exhibitions that looked at AAPIA communities and contributions to the New Mexico and the world.

The 1985 exhibition Turning Leaves: The Family Albums of Two Japanese American Families explored the Japanese American experience as documented in family photographs of the Nagona Family of Los Angeles and the Miyamura/Uyeda family of Gallup, New Mexico.

The NEH-funded traveling exhibition, began with pilot exhibitions developed by the Maxwell and by the Japanese American Cultural and Community Center of Los Angeles.  At the Maxwell, Curator Mari Lynn Salvador and Guest Curator Elizabeth Akiya Chestnut began their work by reaching out to Japanese American residents and cultural organizations across New Mexico. It was the consensus of the Japanese American community that the exhibition should focus on Gallup, which was home to the first Japanese immigrants to the state. Members of the Miyamura/Uyeda family came to Gallup in 1900 and were willing to share their photo albums and family story. Their goal, as described by Hiroshi “Hershey” Miyamura (winner of the Congressional Medal of Honor for distinguished service in the Korean War) was “To let people know we’re Americans. We think and feel like Americans and want to let them know that we’re part of America.”

Heizo and Tazu Uyeda immigrated to Gallup from Kumamoto prefecture in Japan, two of only 8 Japanese immigrants in New Mexico in 1900. Other families from the same region also settled in Gallup: the Miruyamas, who were related to the Uyedas through adoption, and the Kimuras, Tairas, and Teshimas. Like many first generation Japanese migrants, Heizo worked in the coal mines. Tazu opened a boarding house that at its peak housed some 600 miners! In subsequent decades, members of the Miruyama/Uyeda family opened shops, small businesses, and restaurants, and became embedded in the local economy. Frank Uyeda, son of Heizo and Tazu, took many of the photographs in the family albums, which depict family gatherings and celebrations, visits to Japan, and work and daily life over several generations.

The other family featured in the exhibition—the Nagano family— migrated to Los Angeles, where there was a much larger Japanese American community. The exhibition featured Nagano family albums spanning from 1914 to 1978. In addition to the photographs and text derived from extensive oral history interviews with family members, exhibition venues also hosted workshops on preserving family albums and using photographs for historical research.

Maxwell Museum Statement on Anti-Asian Racism: The Maxwell Museum of Anthropology at the University of New Mexico works toward greater understandings of the fullness of human experiences and speaks out against racism and violence targeting Asians and Asian Americans. There is a long history behind this xenophobia in the U.S. that most recently has found voice in conspiracy theories and amplification of stereotypes, resulting in increased violence directed at this community. Here in the U.S. Southwest, the history of this violence finds its roots in the first wave of Chinese immigrants who came to build the transcontinental railroads and work in mines. Upon completion of the railroad lines, in 1882, the United States passed the Chinese Exclusion Act, which prohibited permanent immigration by Chinese laborers and demanded the removal Chinese immigrant workers already in the United States. The first border patrol on the U.S. southern border was actually formed in Texas to prevent expelled Chinese migrants from returning to the country. Later, during WWII, Japanese Americans were interred by the U.S. government, held in internment camps and relocation centers in the American West, including in California, New Mexico, Texas, North Dakota, Montana, Arizona, Colorado, Wyoming, Idaho, Utah, and Arkansas. We at the Maxwell Museum of Anthropology stand in solidarity with Asians and Asian Americans, rejecting and speaking out against racism and violence. We urge you to do the same. (March 18, 2021)