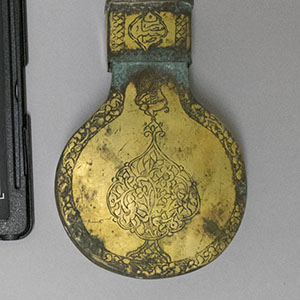 In 1968, Ethel Jane Westfeldt Bunting (1907-1997) of Charleston, South Carolina donated nearly 400 objects from Pakistan and Iran to the Maxwell Museum. She had been introduced to UNM and the Maxwell Museum by her daughter Blair, who came to Albuquerque in the 1950s to study anthropology. Ethel Bunting donated her collection in honor of her mother Martha J. Gasquet Westfeldt. She had accompanied her husband, economist Frederick H. Bunting, to Pakistan in 1958 where they lived until 1963. Frederick was employed by the US government Agency for International Development and the U.S. State Department. During her time in Pakistan, Ethel traveled throughout the country, becoming an expert in regional material culture and architecture. She subsequently returned to the region several times, working with the Pakistan Department of Archaeology and building collections for the Smithsonian Institution. She developed a particular interest in the carved decorations on Sindhi tombs and took rubbings of the elaborate decorations on more than 50 tombs and curated the Smithsonian’s Traveling Exhibition “Sindhi Tombs and the Persistence of Pattern, which came to the Maxwell in 1980. She authored a book of the same name, which was published by UNM Press and the Maxwell Museum in 1982.

The Westfeldt/Bunting Collection was featured in two exhibitions at UNM and one in a short-lived downtown exhibition space managed by the Museum (The Galeria). The first UNM exhibition was a modest one, mounted in 1971 in a single case in the old museum space in the Anthropology Building. A more lavish exhibition, guest curated by Ethel Bunting herself, took place in the Maxwell building (alongside Bunting’s traveling Sindhi Tomb exhibition) in 1980. And some 30 objects from the collection were displayed in the off-site Galeria in 1978.

Ethel Bunting left her mark on the Maxwell Museum in other ways. In 1986, she made a generous gift to the Museum, creating the Ethel Jane Westfeldt Bunting Endowment. Earnings from the endowment continue to support the Museum’s collections, exhibitions, and professional travel of staff.

Acknowledgments: Thanks to Garth Bawden for sharing his knowledge of the Bunting family and collection.