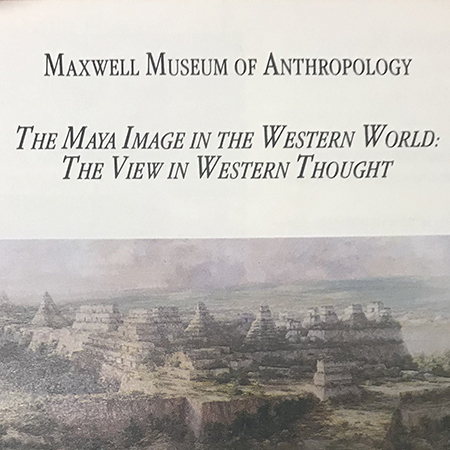 The Maya Image in the Western World (detail of Tikalmural by Carlos Vierra, 1915)

The years 1986 and 1987 saw a trifecta of Maya related happenings in Albuquerque. On November 16, the Albuquerque Museum open the traveling exhibition “Maya—Treasures of an Ancient Civilization” featuring 270 artistic masterpieces of the ancient Maya.  Five days later, the UNM Art Museum and Maxwell Museum simultaneously opened “The Maya Image in the Western World,” examining how western colonizers, adventurers, archaeologists, and scholars, have variously demonized, romanticized, studied, and interpreted ancient Mayan monuments, landscapes, and cultures.

The UNM Art Museum exhibition featured paintings, drawings, prints and photographs by European, North American and Latin American artists, while the Maxwell’s exhibition explored changing intellectual approaches to Mayan studies from the late 19th to late 20th century t. Guest curator UNM Associate Professor of Anthropology Peter Harrison organized the exhibition, which was divided into four chronological sections. The first examined romantic images of the Mayas as conveyed in 19th century literary works and travelers’ accounts. The second traced the beginnings of systematic archaeological research in the late 19th and early 20th centuries. The third section examined the formalization of Mayan archaeological research and the broadening of research questions from the 1920s-1950s. And the fourth and final section focused on (then) contemporary research on the Maya, including the increasing inclusion of Indigenous perspectives, the decipherment of Mayan hieroglyphic writing, and how new photographic and imaging techniques were revealing  previously undetected sites and archaeological landscapes.  The two UNM exhibitions featured the massive 4 x 14 foot murals painted by Santa Fe artist Carlos Vierra: of Tikal (at the Maxwell) and Palenque (UNMAM) for the 1915-1917 Panama-Californian Exposition in San Diego (borrowed from the San Diego Museum of Us—formerly, Museum of Man). The exhibition was funded by grants from the National Endowment for the Humanities, The Maxwell Museum Association, and Mrs. Ethel Jane Bunting.