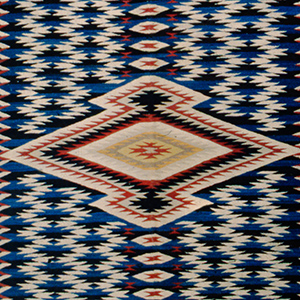 In 1963, Gilbert and Dorothy Maxwell donated a collection of more than 250 objects to the UNM Museum of Anthropology. One of the first temporary exhibitions in the new museum building that came to bear their name, featured a subset of the 19th century Saltillo and Rio Grande textiles that were part of that donation. The press release for the 1974 exhibition described it as featuring “the largest combined collection of Saltillo and Rio Grande weaving ever exhibited in New Mexico.”

Named after the colonial market town of Saltillo in northern Mexico, Saltillo serapes were woven by Spanish and indigenous weavers and were valued garments among Spanish colonial elites in 18th and 19th c Mexico. Weaving workshops using European-style treadle looms were established in Spanish colonial settlements in northern New Mexico, often relying on the labor of enslaved Indigenous weavers. Early Rio Grande weavings were simple plain or striped blankets and serapes. By the mid-19th centuries, Rio Grande weavers had begun to adopt Saltillo designs inspired by the elaborate textiles of northern Mexico. The Maxwell Museum collection includes several dozen Saltillo and Rio Grande weavings spanning from the early 19th to mid 20th centuries, many of which were featured in the 1974 exhibition.

The Rio Grande weaving tradition continues today in Chimayó and other communities along the high road between Chimayó  and Taos along upper reaches of the Rio Grande.