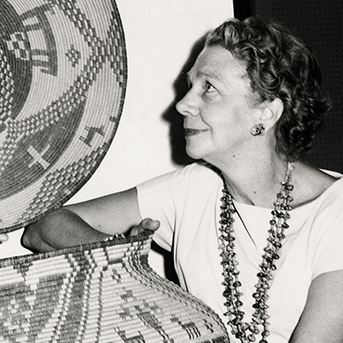 This month we acknowledge Women’s History Month by celebrating some of the inspirational women who helped shape the Maxwell Museum.

Why is UNM's anthropology museum called the Maxwell Museum of Anthropology?  The answer: Dorothy Maxwell.

Dorothy Field (1908-1975) graduated from UNM in 1941 with a bachelor’s degree in Anthropology. She was born in Guthrie, Oklahoma, the daughter of the Bertha and Clark Field. Her businessman father was an avid collector of Native American baskets. Traveling with him on his many collecting trips, Dorothy became a knowledgeable collector in her own right and an expert in Native American art. She worked for the Denver Art Museum, the Indian Arts and Crafts Board at the Pine Ridge and Rosebud Reservations in South Dakota and Turtle Mountain and Fort Totten in North Dakota, and as Assistant Curator for Indian Art at the Philbrook Museum, which today holds her father’s vast collection of more than 1000 Native American baskets. Dorothy married Gilbert Maxwell, a well-known art dealer in Farmington, New Mexico and a collector of Navajo weavings. Over the 1960s and 1970s, the couple donated more than 800 objects to the UNM Museum of Anthropology, including Dorothy’s collection of more than 350 Hopi katsina dolls, Gilbert’s and Dorothy's mother’s collection of Navajo weavings, and Native American pottery, baskets, and paintings, as well as archaeological objects from the U.S. Southwest and Central America.

In 1967, Dorothy played a key role in the establishment of the Clark Field Archive and Library at UNM to hold her father’s books and papers. In the same year, she donated twenty thousand dollars from the sale of oil stock she had inherited from her mother for the construction for a new home for the UNM Museum of Anthropology. With her husband and Museum Director Jack Campbell, she worked over the next few to raise $250,000 for the new Museum.  The renamed Maxwell Museum of Anthropology opened to the public in 1972.  Dorothy Maxwell passed away in 1975. In 1976, the Museum organized the “Dorothy Maxwell Memorial Exhibit,” which featured more than 80 objects from the Museum's Dorothy and Gilbert Maxwell Collections.