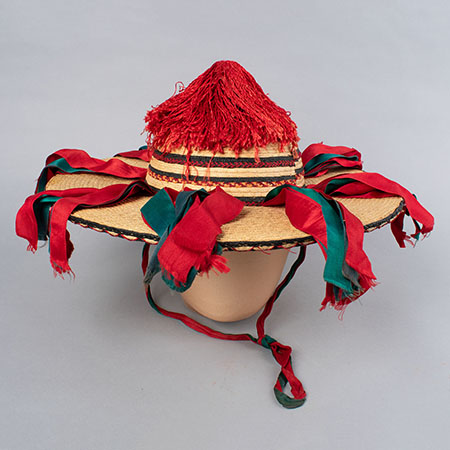 This man’s hat, with a flat brim adorned with red and green ribbons and a red tassel on top, is from the township of San Juan Chamula in the Mexican state of Chiapas. It is made from palm fiber, most likely Sabal mexicana, a fan palm species that is abundant in Chiapas. Dr. Virginia Ann Guess purchased it in 2005 in San Cristóbal de las Casas and donated it to the Maxwell Museum in 2018.

Called a lixton pixolal (ribboned hat), this type of hat would have been worn by civil officials or religious officials at festivals and special occasions. The hat and other garments and accessories worn by officials correspond to the position of the wearer and are visual symbols of their power and authority. The colors of the ribbons vary depending on the neighborhood to which the wearer belongs. Traditionally the hats have seven rows or groups of ribbon sewn to the brim. This hat has eight, perhaps signifying special status of the wearer.