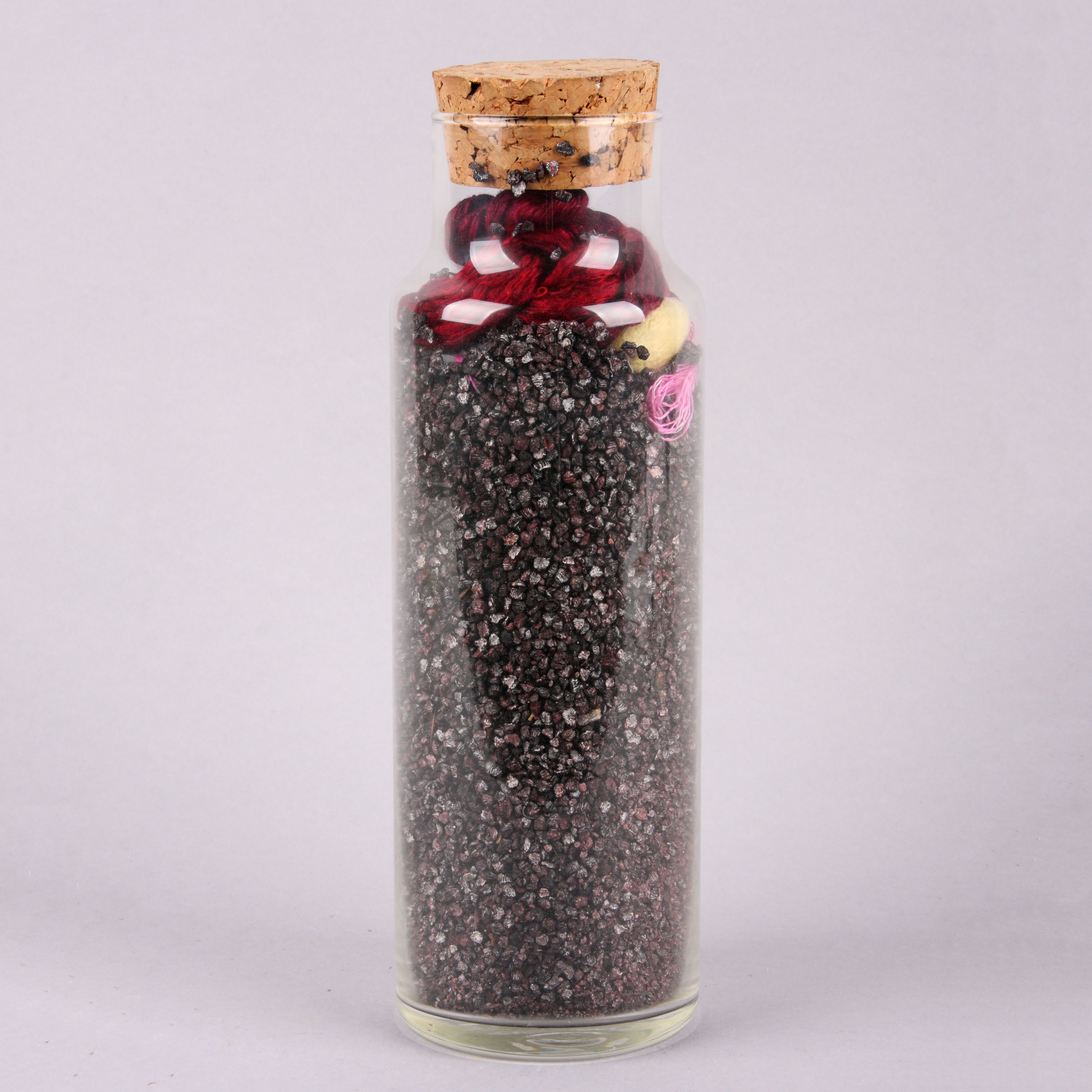 Cochineal is a magenta-colored dye that is derived from tiny parasitical insects (Dactylopius coccus) indigenous to Mexico, South and Central America, and the American Southwest. Mesoamericans have been cultivating the insects and dyeing with cochineal for thousands of years. The brilliant red dye was used for ceremonial purposes as well as general use and was coveted by Indigenous peoples as well as by European colonizers. The dye was a common component of tribute sent from throughout the Aztec empire to Aztec rulers. Spanish conquistadors intensified tribute extraction and shipped large quantities of the coveted pigment to Europe. There it was considered almost as valuable as silver, prized for its colorfastness, depth of color, and association with power, passion, and wealth.

Cochineal insects live and feed off the pads of prickly pear cactus, producing carminic acid, which is the source of the brilliant red pigment. They are collected, dried, and ground into a powder which is then boiled in water to create a dye extract. A range of colors from light pink, to magenta, to even a crimson red can be obtained depending on the dyer's methods and mordents used (mordents are mineral salts added to the dye bath to help the dye bind to the fiber).

Cochineal use has a long history in the United States. Not only was it used as a dye source by Indigenous communities in the Southwest; it was also the source of soldier's "red coats" during the American Revolutionary War. Cochineal dye is also edible! It is a popular source of red food coloring labeled as natural Red 4. Because of the labor intensity of cultivating cochineal and the accessibility of red synthetic dyes, today cochineal has largely been replaced by chemically produced dyes. However, a small but influential group of artists is working to revive cochineal’s ancient traditions to preserve its long heritage and for use as natural, non-toxic colorants for textiles, food, and makeup.

Robert Holzapfel collected this sample of dried cochineal insects in Central America in the mid- to late- 20th century. The late Dr. Holzapfel was a long time UNM professor of German and an avid collector of textiles, many of which now form the Maxwell’s Holzapfel Collection.

Further reading:  A Perfect Red: Empire, Espionage, and the Quest for the Color of Desire. By Amy Butler Greenfield. 2006. New York: Harper Collins.