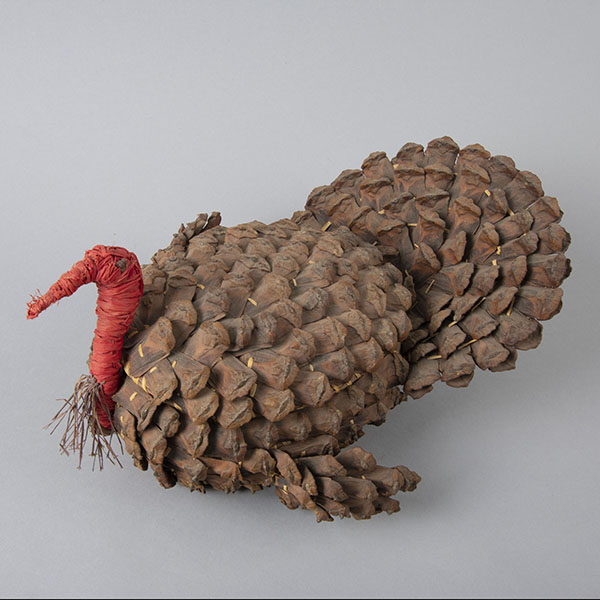 This turkey-shaped container is made of coiled pine needles, raffia, and pine cone. Made by an unknown artist of the Coushatta people of the Southeastern United States, the pine needles are bundled together and coiled to form the overall shape. Pine cone “petals” are then sewn on to give the illusion of feathers. The top of the turkey forms the basket’s lid. It was donated to the Maxwell Museum in 1978 by Mr. Art Lerner.

The Coushatta people speak Koasati, a Muskogean language, and currently live in Louisiana, Oklahoma, and Texas, after being removed from their original eastern territory in what are now the states of Tennessee, Georgia, and Alabama. There are three federally-recognized Coushatta tribes, one in each of the states where they currently reside. Among Native Americans, turkeys are prized for their feathers and are important figures in folklore, as the Coushatta story “Owl and Turkey Trade Calls”  attests.

There is only one wild turkey species in North America (Meleagris gallopavo), with five sub-species. This basket likely depicts the sub-species with the widest habitat, the Eastern wild turkey (Meleagris gallopavo silvestris), the male of which (known as the “Tom” turkey) is most associated with American Thanksgiving meals. Turkeys were domesticated in both Mesoamerica and the US Southwest; however, the domestic turkey many of us will be eating on Thanksgiving likely traces its origins to pre-Hispanic Mexican culinary traditions. To learn about the actual story of the first Thanksgiving, see the National Museum of the American Indian’s downloadable guide Harvest Ceremony: Beyond the Thanksgiving Myth.

Visit http://www.koasatiheritage.org/blog/2013/jun/19/baskets/ to learn more about the basket making tradition of the Coushatta people.

In the Koasati language, the word for turkey is “fiito.” Check out this Koasati dictionary for pronunciation: http://www.koasatiheritage.org/dictionary/alphabet/ (click “F” at the bottom of the page).

To lean about interesting research on turkeys in New Mexico and the greater Southwest, see the article by UNM Anthropology Department faculty and students, “Turkeys on the fringe: Variable husbandry in ‘marginal’ areas of the prehistoric American Southwest,”   by Emily Lena Jones et. al., Journal of Archaeological Science: Reports. December 2016 10:575-583.

Note: If you the above links to Owl and Turkey Trade Calls,  don't work, copy and paste the following into your web browser:  http://koasati.blogs.wm.edu/interviews/bertney-langley-owl-and-turkey-tr...  and to get to  Harvest Ceremony: Beyond the Thanksgiving Myth, try https://americanindian.si.edu/sites/1/files/pdf/education/NMAI_Harvest_S...