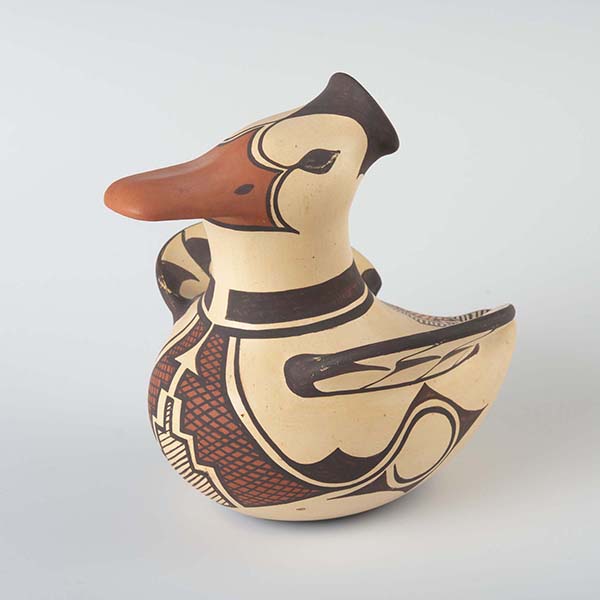 Ceramic duck figurine by Rowena Him

This polychrome duck effigy vessel was created by Rowena Him of Zuni (A:shiwi) Pueblo in the 1980s. It was displayed at the 1984 Maxwell Museum exhibition "From the Center Place: Contemporary Zuni Pottery and Its Makers."

The Zuni peoples, who live in western New Mexico, historically used pottery in nearly every aspect of their daily lives. Ceramics were used for water transport, water storage, food preparation, and food consumption. In the 1800s, potters were predominantly women and ceramics were made for community use, although they were also traded with other Native groups. In the late 19th century, anthropologists from the Smithsonian Institution and other museums began collecting pottery from all the Pueblos in the Southwest, especially Hopi and Zuni. By the turn of the 20th century, tourism was becoming more common and Zuni potters began to trade their pottery for commercially available goods at trading posts. As a result, Zuni pottery became distributed to wider audiences. Pottery making continues to have great importance today.

Birds have long played a significant role in Puebloan culture: from their depictions in rock art and on ceramics to the use of feathers in ceremonies and other contexts. There is a belief among the Zuni that the spirit takes the form of a duck when traveling home. Duck imagery can also be found in Zuni katsina dances.

To learn more about Zuni potters and for an exclusive interview with Rowena Him and her husband Randy Nahohai, check out Dialogues with Zuni Potters by Milford Nahohai and Elisa Phelps (Zuni A:shiwi Publishing, 1995). When describing her process of making pottery, Rowena said “I usually don’t know what I’ll be making… If I really have my mind set on something—a duck canteen or whatever—my mind is settled. Other times I have a hard time sitting and making… I guess it’s just what the heart desires to make into the clay.” (Nahohai and Phelps: 41-42).

Another source is Margaret Hardin’s Gifts of Mother Earth: Ceramics in the Zuni Tradition. See also the website for the A:shiwi A:wan Museum and Heritage Center, http://www.ashiwi-museum.org/.