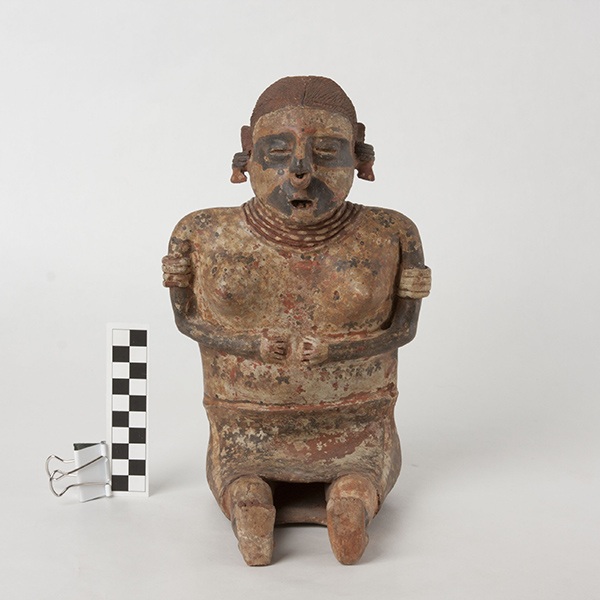 With this post, the Maxwell Museum of Anthropology and UNM Art Museum Student Advisory Board (UNMAM SAB) are launching a new online collaboration featuring UNM museum collections and the work of student researchers. Today's post features the work of Lauren (Beth) Wilson Norwood, a doctoral student in the History of Art, whose research focuses on the art and architecture of ancient West Mexico with a particular interest in the study of body art and adornment depicted on ceramic figurines.

Ceramic anthropomorphic figurines, such as the one above, represent a cultural touchstone for people living in western Mexico—specifically, Nayarit, Jalisco, and Colima—during the Late Formative and Early Classic period (c. 300 BCE to 450 CE) [see map]. West Mexican ceramics were originally discovered in shaft tombs, underground burial chambers connected to the surface by a vertical shaft. The dead were interred in an extended position and were surround by ceramic vessels and figurines. The tomb is not the only location figurines are found in; figurines are also recovered from residential and ceremonial architecture. Much like the various contexts in which these ceramics are found, West Mexican figurines come in a variety of sizes and styles. Both solid and hollow figurines range in size from only a few inches to as large as four feet tall, and are made in as many as seventeen different regional styles. This particular figurine is part of the Lagunillas sub-style, which is primarily found in Nayarit. It is identifiable by the semi-closed eyes as well as black and red body paint or tattoos.

West Mexican figurines depict individuals adorned in a variety of costumes and participating in various daily and ceremonial activities. This hollow Lagunillas style figurine is just under six inches tall and depicts a seated woman whose hands rest on her slightly swollen abdomen. Like many Lagunillas figures, she wears a skirt, arm bands, necklaces, a nose ring, and elaborate earrings. The torso is unadorned which is a common feature of Lagunillas figurines and allows the viewer to clearly see the black and red designs on the figure’s skin. The subject and function of Lagunillas figures are difficult to decern. Unlike other styles Lagunillas figures lack accoutrements such as wicker armor, spears or club used to identify warriors.

Anthropologist Robert Pickering has suggested that these figurines depict ancestors or perhaps the individuals the figures accompany to the grave. My research shows that Lagunillas figures are a form of highly-stylized portraiture in which the physical likeness is deemphasized and body art and adornment communicate the subject’s social identity. Adornment and body art, which are often used as external signifiers of identity and status, were likely used by the people of ancient West Mexico to communicate aspects of the subject’s identity, including their membership in a kin group, position within the social hierarchy, and even record life events. A viewer knowledgeable of the signs encoded in West Mexican adornment could ‘read’ figurines like a text, allowing them to identify the social and perhaps individual identity or role in their community. These figurines may have been used in rituals associated with ancestor veneration in which the ceramic object serves as a vessel for the ancestor’s spirit and facilitates communication between the living and the dead.

To learn more about the UNMAM SAB, please visit https://artmuseum.unm.edu/for-students/

To see Beth's post at the UNMAM site and much more go to https://artmuseum.unm.edu/journal/