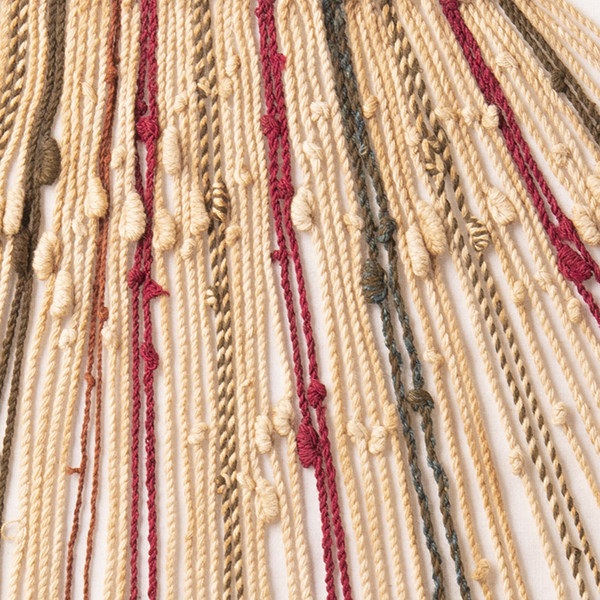 From the early 1400s until the 1530s AD, the Inka ruled one of the world’s most extensive empires, Tawantinsuyu, the “Land of the Four Corners.” At its maximal extent, Inka territories extended some 2500 miles north-south along the Pacific Coast and Andes mountain chain of South America from modern Ecuador to central Chile, connected by a sophisticated road system. Administrative records were kept on khipus, knotted cord objects consisting of a long cotton or camelid cord with a number of subsidiary or “pendant” cords.  Various kinds of knots tied along the pendant cords in specific locations, recorded numerical and other information. Cord color also likely conveyed information. The information on khipus was recorded and read by specialist khipu keepers, or khipumayuq. While contemporary scholars cannot fully read the information encoded in khipus, they have identified two main categories: numerical khipu used for accounting in a base-10 system and account for about two thirds of surviving khipus.  The remainder, including the one in the Maxwell Museum collections (as identified by Dr. Gary Urton), are narrative khipu, believed to have served as mnemonic devices for recording names, stories, and other non-numerical information.