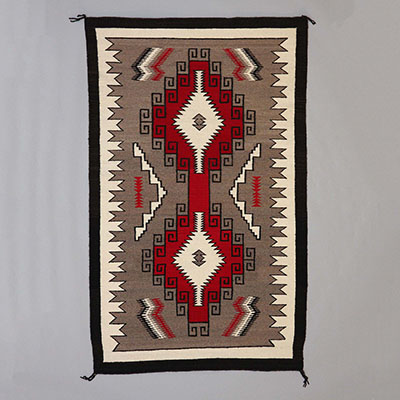 This Klagetoh Diné (Navajo) rug was woven by Esther Billie between 1920 and 1940. Klagetoh is a regional style named after Klagetoh, Arizona.

Klagetoh rugs are related to the popular Ganado style, and both are from the Hubbell Revival period. The main difference between them is the reversed color scheme. Instead of a red field with black, grey, tan, and cream accentscommon in the Ganado rugs, Klagetoh rugs typically have a grey or tan field with red, cream, and black accents. Don Lorenzo Hubbell operated his trading post from 1878 to 1930, when his son and wife took it over. It is now a National Historic Site run by the National Park Service.  At the turn of the twentieth century, Hubbell, who was born in Albuquerque, New Mexico, commissioned small oil paintings of over 100 rug patterns for a study of rug designs. He then commissioned weavers to copy and reproduce the motifs that he considered most appealing to his predominantly affluent and white client base. In the face of these highly regulated production standards, many Diné weavers incorporated individual and cultural expressions into the rugs, adding contrasting strands of yarn, a feather, or spirit lines. In this way they deployed independent aesthetic practices to support and reproduce Navajo values.

This rug consists of a gray background with diamond designs in the center field enclosed in a thick border. Esther Billie wove two serrated diamond motifs in the center outlined by a scroll/swirl design in red, cream, and black. She also incorporated three stacked zigzags in each corner in red, cream, and black, as well as two terraced V shapes in cream with thin black borders that point inward along each vertical side. In accord with this style, there is a thick border surrounding the rug’s entirety: first a bold border in black, then in cream. The cream border, straight on the horizontal edge and serrated down the vertical side, is finely traced in black fiber. The rug is handwoven and composed entirely of handspun wool yarn. A blend of color sources was used, consisting of aniline red and naturally colored wool. With seven warp and thirty weft threads per inch, the rug, which measures 48” x 77,” or 4 ft x 6.5 ft, reveals her mastery of the weaver's art.

Read Mullen donated the rug to the Maxwell Museum in 1964.

Whitaker, Kathleen. Southwest Textiles: Weavings of the Navajo and Pueblo. Seattle and London: University of Washington Press in Association with Southwest Museum, 2002.