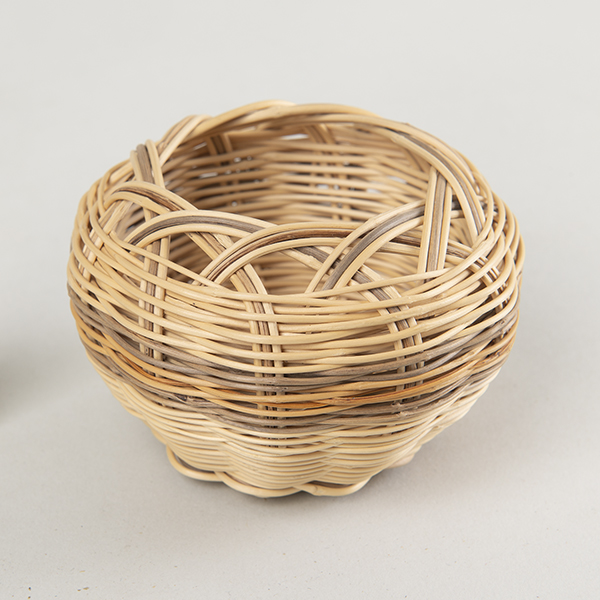 This small basket was made by Cherokee artist Larry Croslin at a National Endowment for the Arts (NEA) funded workshop held at the Maxwell Museum in September 1985. Croslin, who teaches basketry at the Taos Art School, is a member of the Cherokee Nation of Oklahoma and is descended from the Old Settler Cherokees of Sautee, Georgia.  He works in a variety of materials including white oak, buckbrush, honeysuckle vines, and horse hair, collecting and preparing materials using traditional methods. The recipient of numerous awards, Mr. Croslin is responsible for revitalizing white oak basket weaving among the Oklahoma Cherokee.

This spherical, double-weave basket is made of undyed and dyed honeysuckle vine. To prepare the materials, Mr. Croslin harvests the vine, twists it into a wreath, and boils it. Then the outer sheath is removed and the vine is left to bleach in the sun. To achieve different colors, vines are simmered in broths of blood root (orange), black walnut hulls (brown), and dyewood (yellow).

Mr. Croslin donated two honeysuckle baskets, as well as vines and dye materials to the Maxwell upon the completion of his workshop. We are honored to hold his work in the collections.

Coming full circle, this basket will be on view in an upcoming exhibition featuring Native American baskets opening in Fall 2022.

To learn more about Mr. Croslin's work, check out: