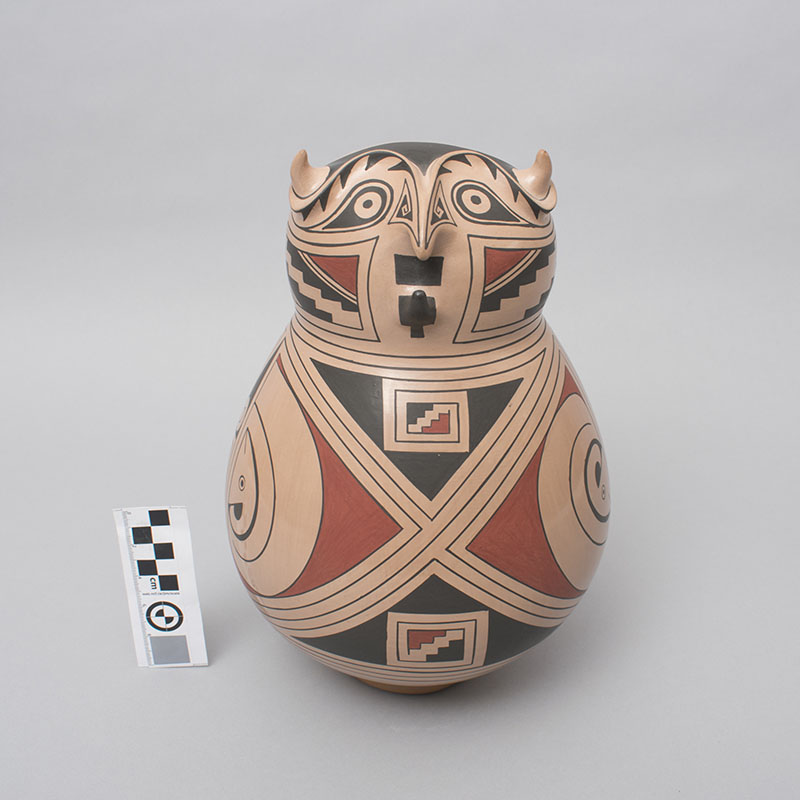 This effigy jar was crafted by renowned potter Sabino Villalba from the village of Mata Ortiz in Chihuahua, Mexico. The polychrome owl effigy, inspired by archaeological ceramics from the nearby site of Paquimé (Casas Grandes; ca. AD 1130-1450), has small horn-like ears and a pointed beak/nose, with a black square for the mouth and round black eyes. Thin lines encircle the effigy’s neck and create an “X” across its chest.

Mata Ortiz, located in northern Chihuahua, is renowned for the polychrome pottery, produced today in many of the community’s households.  Most scholars trace the  development of this tradition to local farmer Juan Quezado, who collected pottery sherds from the surface of Paquimé. By studying the pottery fragment and experimenting with clays from local arroyos, in 1974, he succeeded in creating polychrome pottery, and taught the craft to family members and other village residents. More recently, scholars continue to acknowledge Quezada’s importance, but suggest he was one of a number of village residents who worked together to develop the distinctive Casas Grandes style pottery in the 1960s and 1970s. Today,  hundreds of Mata Ortiz residents earn their living producing pottery.

Sabino Villalba is the son of Andres Villalba, another well-known Mata Ortiz potter. Sabino and his wife, Veronica Silveira de Villalba work together to make finely decorated pottery vessels: she sands and polishes while he paints and fires.

Allene and Walter Kleweno purchased this vessel in Mata Ortiz while they were on a tour with the Western New Mexico University Museum in 2003 and donated it to the Maxwell Museum in 2017.

And for another take: