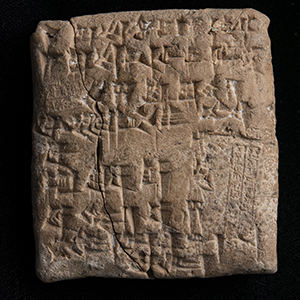 One of the hallmarks of the state – ancient or modern – is bureaucracy.  State administrators keep records of land, economic production, people, expenditures, and taxes. In ancient Mesopotamia, writing systems are believed to have been created as an administrative tool for tracking agricultural production and the movement of goods to and from palaces and temples. This small tablet dates to the reign of Rim-Sin I who ruled the city of Larsa in modern Iraq in the 18th century BC. It records the payment of sheep to various temples. In addition to the inscribed text, officials impressed their personal seals onto the soft clay tablet.

Mesopotamian scribes wrote texts on unfired clay tablets. The name cuneiform to describe ancient Mesopotamian writing comes from the Latin term cuneus (wedge), referring to the wedge-shaped characters formed by impressing reed styluses into the soft clay. The Maxwell Museum holds a small collection of cuneiform tablets donated to the Museum by Frank Hibben in 1967. We do not know how he acquired them, but he likely purchased them from a private collector. The looting of archaeological sites and illicit sale of Mesopotamian antiquities has been occurring for more than a century history and continues to threaten the region’s archaeological heritage today.  As we continue to ‘excavate’ the Maxwell’s records, we hope to learn more about the paths these tablets traveled before coming to the museum.