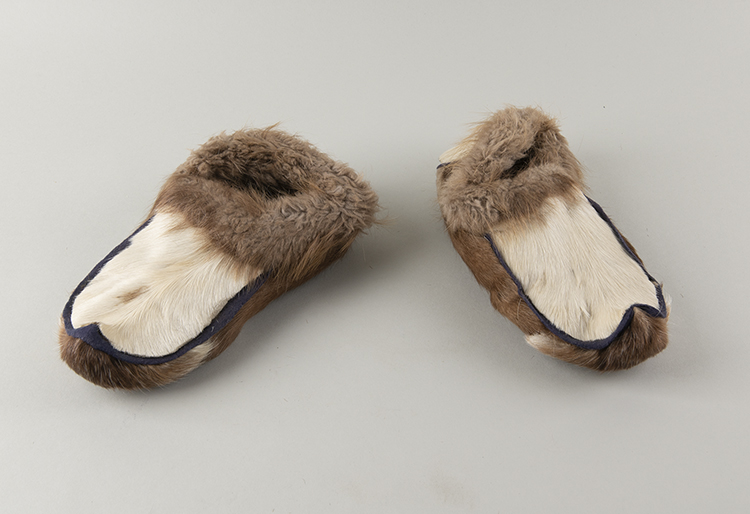 These slippers were made by a Sámi woman in Alaska in 1933.  The story of how she came to be in Alaska is embedded in the history of 19th century colonial expansion.

In 1891, while touring Inuit villages of western Alaska, US Government official and missionary Sheldon Jackson developed the plan to bring domestic reindeer from Scandinavia to address what he perceived to be a severe food crisis caused by declining caribou populations, as well as to encourage Native communities to adopt herding and abandon traditional hunting practices.  In 1894 and 1898 (overlapping with the Gold Rush that drew some 100,000 Euro-Americans to Alaska between 1896 and 1899), the United States Government brought domestic caribou (aka reindeer) from Siberia to replace the wild stock. They also recruited 16 Sámi reindeer herders from Norway to teach reindeer husbandry to Native Alaskans.  In the early 1930s, when these slippers were made, there were more than 100,000 reindeer in Alaska. However, this did not last long and within a few decades their populations crashed as a result of overgrazing and disease.

The wife (whose name was not recorded) of one of these Sámi herders made these slippers in the style of a Sámi boot for Dr. Julian G. Manser.  The Maxwell also holds a collection of photographs taken in Alaska by Manser while he served as a dentist for the U.S. Public Health Service in the Bering Sea region in 1932-1933.

The slippers are on display in the Maxwell in Sámi Dreams through August 2022.