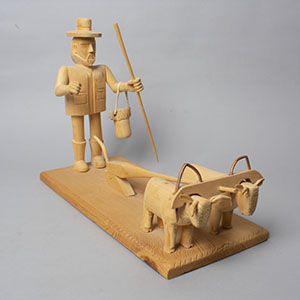 This carving in aspen wood depicts the figure San Isidro Labrador on a wooden base behind a plow with two oxen. He iholds a wooden bucket with leather straps draped over his right arm. The figure is unpainted. It was made by the carver George Lopez (1900-1993) of Cordova, New Mexico.

San Isidro Labrador (sometimes spelled Ysidro) is the Catholic patron saint of farmers. The original Isidro was a farmhand from near Madrid, Spain known for his piety. He was canonized in 1622 and his feast day is celebrated on May 15th.

The image of San Isidro and the plow is popular figure in New Mexico folk art, especially woodcarving. He is usually depicted wearing colonial era clothing, with a flat-topped hat, short jacket, and knee length pants.

Spanish settlers who came to New Mexico centuries ago brought the tradition of venerating San Isidro, who is associated with bringing rain and helping to relieve drought. He is often associated with the building of acequias, gravity-fed water channels  used to irrigate crops.