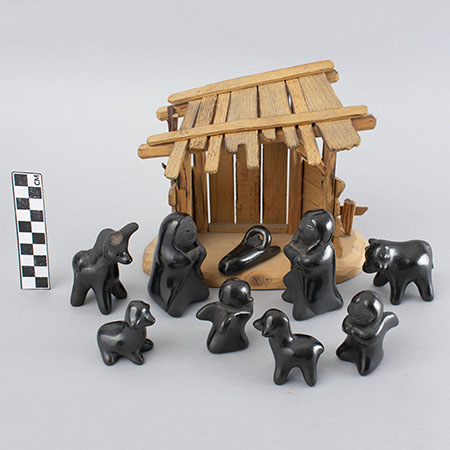 This blackware ceramic “Nacimiento” or nativity scene was made by Santa Clara potters Dorothy and Paul Gutierrez around 1975. It includes angels, animals, Mary, Joseph, and baby Jesus. A small wooden manger, made in Italy, completes the set.

Dorothy Gutierrez (1940- ) made the figurines and her husband Paul (1940-2017) did the sanding and polishing. Dorothy and Paul Gutierrez were married in 1965 and are known for their figurative pottery. Dorothy first began making her nativity sets in 1971.

Animals in this Nativity scene are two lambs, a donkey, and a bull. Nativity scenes by other Native artists have been known to include other animal species native to the region, such as deer, antelope, rabbits, or bears. It was donated to the Maxwell Museum by Mrs. J.R. Modrall in 1988, who likely added the wooden manger, which has a "Made in Italy" label.

Paul Gutierrez is the son of Luther Gutierrez, featured in a previous “Object Monday” post:
https://maxwellmuseum.unm.edu/news-events/news/object-monday-santa-clara-pueblo-fish-figurine

More information about the Gutierrez family can be found in “Fourteen Families in Pueblo Pottery” by Rick Dillingham (1994, University of New Mexico Press).