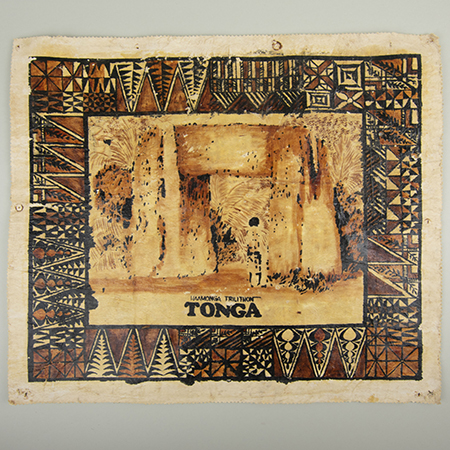 This souvenir bark cloth or ngatu (also called tapa) comes from the Kingdom of Tonga, a  Polynesian nation of some 100,000 inhabitants located ca. 1000 miles northwest of New Zealand. Consisting of 169 islands (36 inhabited), Tonga sits along the tectonically active “Ring of Fire.”  On January 15, 2022 the Hunga Tonga-Hunga Ha’apai volcano exploded, sending a 300 mile wide cloud of ash and rocks across the archipelago and launching a tsunami that sent devastating waves across low-lying islands. Today, the extent of damage and loss of life are still being assessed.

People arrived in the Tonga archipelago sometime between 1500 and 1000 BC. In the 14th C AD, the islands were united under the Tu’i Tonga chiefdom, based at Heketa on the eastern side of Tongatapu Island. Today the site, which contains numerous stone structures and royal tombs, is best known for its largest stone monument, the imposing Ha’amonga ‘a Maui or (Ha’amonga Trilithon). This unique monument is built of of two standing limestone columns connected by crossbar or lintel; it stands some 17 feet above the ground. Together, the stones are estimated to weigh at least 55 tons.

Ngatu, or bark cloth, is made throughout Polynesia. Tongan ngatu are made by women and are a valued form of wealth that are displayed and gifted in large numbers in major ceremonies. The manufacture of traditional tapa is an arduous practice, from processing the bark of the mulberry tree, to beating it thin, and applying elaborate painted decoration.

This bark cloth is not that. It was instead produced as a souvenir for tourists. Rather than hand-painted designs it bears a print of the Ha’amonga ’a Maui, and was likely sold as a memento to visitors to the famous site. This tapa cloth was donated by Marilyn Hibben, wife of former Maxwell Director Frank Hibben, along with other objects the couple acquired on an around the world cruise.

How to help the people of Tonga. The following organizations are among many providing aid to Tonga: International Foundation of Red Cross, UNICEF, CARE.