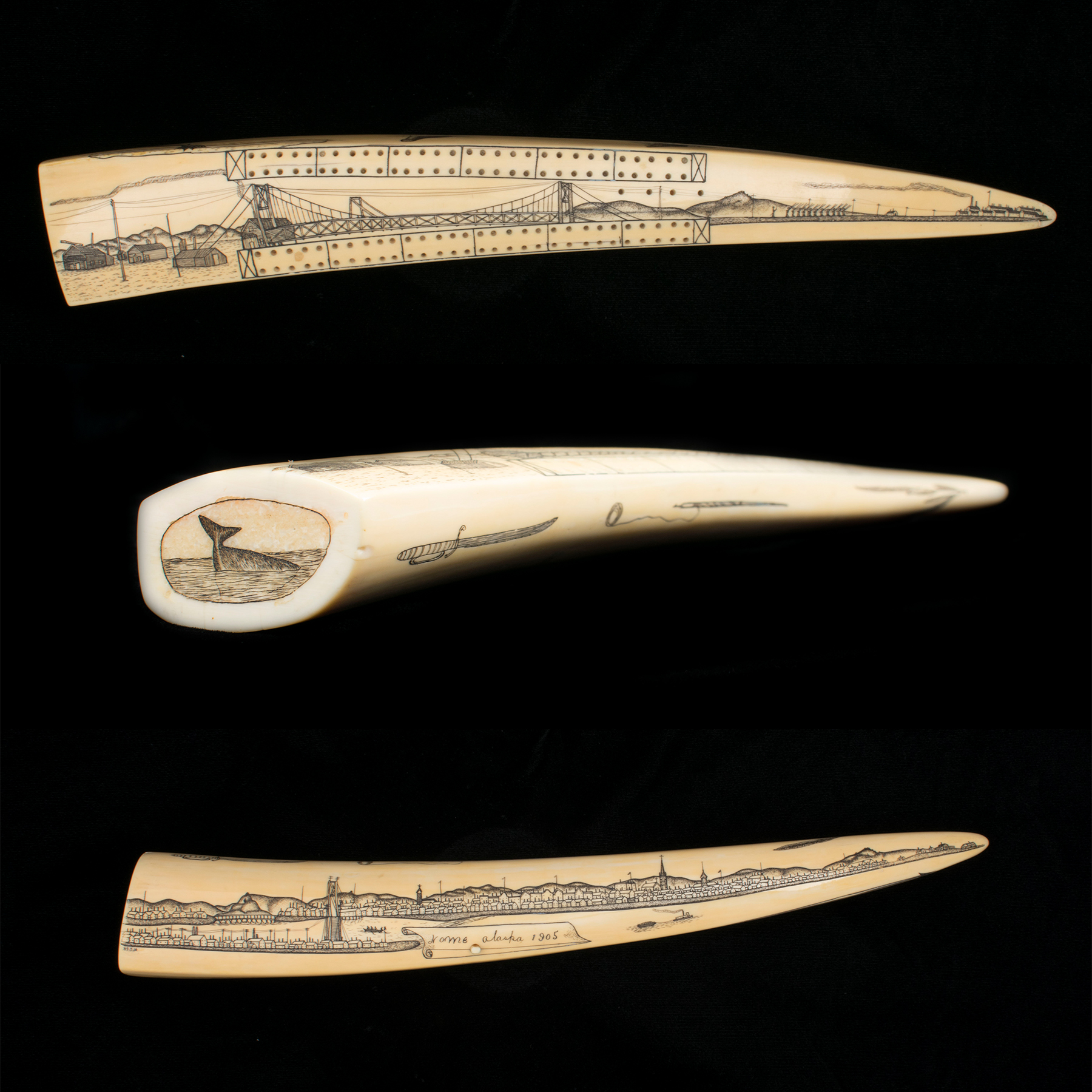 This ivory walrus tusk carved by an unknown artist was used as a game board (cribbage board). Labeled “Nome Alaska 1905”, the scrimshaw engravings depict a rapidly urbanizing region. It is an example of a hybrid art form created by Inuit carvers who integrated the centuries-old indigenous ivory carving traditions with the scrimshaw carvings associated with American whalers. Inuit ivory carver Angokwazhuk created this new art form in 1890. It was quickly adopted by other Inuit carvers, who produced cribbage boards and other pieces for whalers, tourists, and settlers flocking to Alaska in search of gold.

The two rows of the game board (top of composite photo) flank a suspension bridge; to its left are a number of small structures, while to the right of the bridge are depicted soldiers carrying bayonets marching away from a military base. Telephone/telegraph poles are visible on each side of the bridge, part of an extensive communication network installed in the region beginning in the 1890s. Mountains are visible in the distance.

On the opposite side of the board (shown on bottom) we see a depiction of Nome, Alaska. The discovery of gold in the area in 1898 fueled a gold rush, attracting more than 10,000 new settlers to the region within a year. This detailed carving captures the growth and density of this sprawling coastal settlement.

The carver also created images along edges of the piece: on one side is a sword, harpoon, and feather; on the other, otters, whales, and a walrus. On the flat (root) end of the tooth, a whale’s tail rises from the sea.

This object is part of a collection donated to the Maxwell Museum in 1989 by Lois Minium. She had purchased the collection, containing several objects and a photograph album, from 92-year old Essie Fletcher, whose husband had been a surveyor in Alaska. The album primarily contains photographs taken by Susan R, Barnardi, who taught in a government school in Kingegan, Cape Prince of Wales, Alaska from 1901-1906 and produced several albums containing her photographs. The final photograph in the Maxwell album appears to have been added separately. It depicts a church in Nome, Alaska, that appears to be the tallest church depicted in the carving.

Note: The initial draft of this post was prepared by Isaac Reichsfeld and Daniel Gavin, students in Professor Holly Guise’s Making History: Native America class in Spring 2022.  Additions and edits were made by Maxwell Museum staff

Arianna Wheaton Murphy, 2021, The poetics and politics of ivory collecting and display at the Milwaukee Public Museum. MA Thesis in Anthropology, University of Wisconsin, Milwaukee. https://dc.uwm.edu/etd/39/