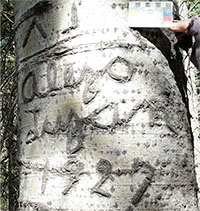 Since 2016, the Office of Contract Archeology has been conducting a series of archaeological surveys for the National Park Service in the Valles Caldera National Preserve as part of a Cooperative Ecosystem Study Unit agreement. As of the 2019 field season, OCA has surveyed a total of 13,996 acres in the Preserve. Besides numerous archaeological sites, the OCA crews also documented 624 carved tree trunks (dendroglyphs), mostly aspens, left by past users of what was formerly known as the Baca Location No. 1, part of a land grant.

Many of the dates of the carved aspen features fall within the range of historic sheep herding, which for Hispanic inhabitants of the area likely started by the 1850s, and continued through 1950s (Anschuetz and Merlan 2007). The Hispanic names recorded, and local toponyms, are consistent with the known populations that herded sheep in the Baca Location No. 1 under the partido system. Although many of the recorded carvings were near roads, these were likely not built by partido sheep herders. However, the time frame in which sheep were herded in the Baca Location No. 1 Grant overlaps with the period of industrial logging in the area, from about 1926 to 1971, which is likely the origin of the roads.

One individual was a particularly prolific carver of aspen dendroglyphs -- Alejo Luján. Alejo is a traditional form of abbreviating the given name Alejandro in the Spanish language, so his actual name may have been Alejandro. As many as 30 inscriptions appear to be associated with this one individual. The name Alejo occurs 25 times on San Antonio Mountain in the western part of the Preserve, mostly as “Alejo Lujan”, sometimes with a “AL” stylized as “A⅃”, or “Ʌ⅃” above or below (n=8), and often with dates (n=22) and a toponym (n=13, Cow Spring, NM). Dates associated with Alejo range from July 1908 or 1918, through July 19, 1927, and all are in July, if month could be determined. The majority of the carvings with the name Alejo Lujan were associated with dates from July 5 through 19, 1927, a span of about two weeks. He appeared to alternate between eastern, western, and central portions of his range every day or two during that time span.

On all trees associated with Alejo Lujan where language is identifiable, they are in Spanish, as identified by dates (Julio) and sometimes by toponym ([de] Cow Spring, NM, [de] Condado Santa Fe). Sometimes the name was written in block letters (n=14), and sometimes in cursive (n=10). The cursive-inscribed Alejo carvings were all from 1927, primarily between July 7 and July 18 or 19, although one was recorded with only the year. Only in one case was Alejo found without the surname Lujan, but it may yet have represented the same person, although the handwriting was different from the other examples. This carving was the oldest “Alejo” glyph recorded. In addition to these, one glyph where only the initials Ʌ⅃ and surname Lujan with a date of July 13, 1927, was recorded, and another was recorded with Δ⅃ and other inscriptions, not including “Alejo” or “Lujan”, and although these do not have the full name, they can reasonably be assumed to represent the same person, based on the other similarities.

OCA has not yet conducted a search of historical records on Alejo (or Alejandro) Luján, but it is almost certain that New Mexicans still living today are his family members or even descendants. 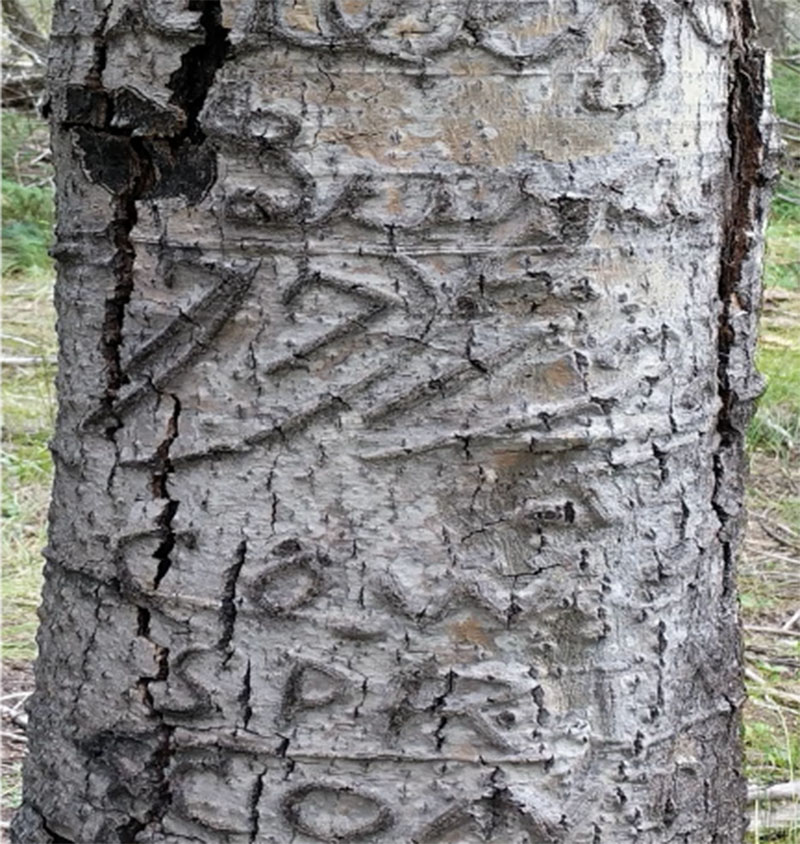