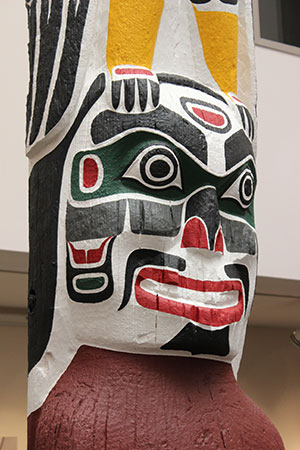 In 1907 Smith Siwid, Chief of the Tlowitsis, commisioned a totem pole carving from the renowned Kwakwaka’wakw (Kʷakʷakaw̓akʷ) artist Yakuglas (Yakwuλas), or Charlie James. The
equally famed Mungo Martin possibly also worked on the pole as an apprentice.

The Pole, features seven crest figures, or supernatural and historic ancestors. These beings affirm the lineage and authority of Smith Siwid, the pole’s commissioner, and his family. The Tlowitsis community has long debated exactly what the bird at the top of this totem pole is; often it is thought to be Raven (ǧʷawina). However, according to notes left by Tlowitsis elder, Emily Smith Aitken’s father, Tom Smith, the bird at the top is not a Raven, but rather it is
a Kingfisher (kədalawi). This is followed in order by human (bəǧwanəm), wolf (uligən), humpback whale (ǧwəyəm), river otter (Xwəmdi) – though here again, there is some question and perhaps this is black bear (λa?i), great horned owl (textexalił), and at the base is Numas, first man (gəlgəlis - first to walk in this world), who holds the people of the Tlowitsis Nation up. Family history recounts that Smith Siwid dedicated the pole at a p̓əsa, now referred to as a potlatch, to demonstrate that its crests confirmed his descendent claim as chief. A potlatch is a ceremonial feast given in order to commemorate significant community or life events. On these occasions the hosts distribute gifts to those invited in order to establish or reaffirm social status.

The Smith Family Totem Pole originated on Turnour Island, British Columbia, Canada when Chief Smith Sewid or Sewidanaquilla commissioned Charlie Yakuglas James. In 1941 two poles stood in the village; by the end of the year both had disappeared. Frank Hibben, an assistant professor in the Department of Anthropology at the University of New Mexico, purchased one of the poles, but possibly not the Smith family pole. The truth is, the pole was take illegally. When the pole disappeared from the village, members of the Tlowitsis Nation filed a crime report with the Canadian police. Hibben towed the pole to Ketchikan, Alaska and described it as Tlingit to bypass questioning at the U.S.–Canadian border. From the 1960s until April 1, 2017 the pole was displayed on the campus of the University of New Mexico without interpretation connecting the pole to the community from which it was taken, and for whom it has continuing significance. 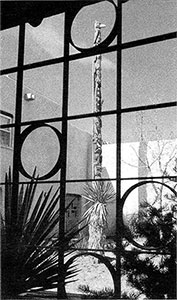 Totem Pole inside the courtyard of the Maxwell Museum

The totem pole was removed from its origins at a time when anthropologists visited indigenous communities internationally to collect material culture as part of salvage ethnography, which is the recording of the practices and folklore of cultures allegedly threatened with extinction, including as a result of modernization.
(In practice, many of those cultures have survived.) Salvage ethnography is generally associated with the American anthropologist Franz Boas; he and his students aimed to record “vanishing” Native American cultures. Objects from indigenous peoples were identified as having value for research and also to begin to develop collections for museums.

In 2012, Beverly Singer, UNM Professor of Anthropology and graduate student India Rael composed a proposal to Maxwell Curator of Exhibits Devorah Romanek to undertake research on the pole including its history and to investigate how the museum might better care for it and so this project began. As we began to dig into the origins of the totem pole in the collection, it was discovered that a small delegation from the Tlowitsis Nation, including Chief John Smith had paid a visit to the Maxwell in 2010 to inquire about the pole. No action concerning the pole had been taken at that time. Under the directive of Maxwell Director James Dixon then David Phillips, Interim Director and Les Field, Chair of the Department
of Anthropology, Curator of Ethnology Lea McChesney moved forward with contacting the Tlowitsis Nation and Chief Danial Smith.  At the 2015 Society for Applied Anthropology meetings in Vancouver, a community meeting was held with Chief Danial Smith and Chief John Smith and representatives of the Tlowitsis Nation,  Beverly Singer, India Rael, Devorah Romanek and Lea McChesney, about what the Maxwell should do about the pole. The Tlowitsis Nation requested the pole stay at the University of New Mexico, be restored, appropriately renamed for the Smith family, that contextual information be included and that the University acknowledge the wrong that was done in removing the pole.

In December 2016 and March 2017, Chief Danial Smith visited the University of New Mexico and an understanding was reached for the relocation, restoration, re-interpretation and exchange of information regarding the Smith Family Totem Pole. On April 1, 2017, the Smith Family Totem Pole was removed from the Maxwell courtyard, lifted by crane
over the Museum, lowered and placed in a cold storage container adjacent to the Musesum for two weeks in order to eliminate insect infestations. On April 15, the pole was moved into the Hibben Center atrium, where a team led by conservator Landis Smith and including conservators Mina Thompson and Harriet Raeburn cleaned, brushed, removed debris and previous restoration materials.