Ask the Maxwell Friday: What is the oldest artifact in your collection? 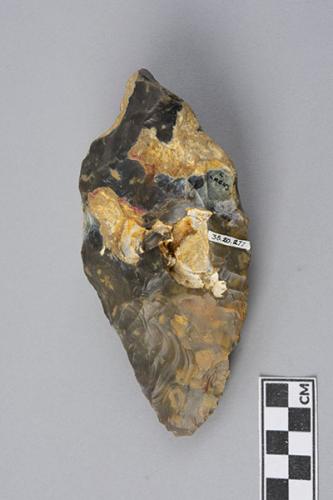 Abigail S. Asks: "What is the oldest object in the Maxwell Collection"

The Maxwell Museums holds a small collection of Paleolithic (Stone Age) artifacts from Europe and the Middle East. This stone tool is a handaxe that was found in a gravel pit near Cagny in the Somme Valley of northern France and was donated to the Museum by Director Frank Hibben in 1938.

Thick alluvial gravel beds along the Somme have yielded a large number of Middle and Late Acheulian period sites dating from ca. 550,000-300,000 years ago. Indeed, it was the 1842 discovery of similar stone tools at nearby Saint-Acheul by Boucher de Perthes that gives the Acheulian period its name.

Handaxes are bifacial (flaked on both sides), symmetrical, pointed tools that have been referred to as the “Swiss Army knives” of the Paleolithic. They were likely used for a variety of purposes, such as butchering animals, scraping hides, cutting wood or digging roots. Some scholars have  proposed they may have been thrown like discus’ or Frisbees and used in hunting.

The handaxe is among the most enduring tool forms made and used by ancient humans.  The earliest appear in East Africa around 1.8 million years ago, associated with early Homo erectus; this one was made and used more than a million years later and a continent away by an archaic Homo sapiens.