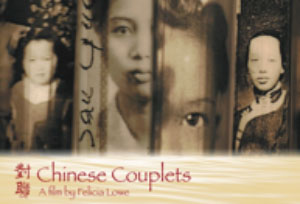 Chinese Couplets is veteran filmakerFelicia Lowe’s latest hour documentary. Part memoir, part history, part investigation, the film spans two centuries, three countries and four generations of women in this intimate story that reveals the impact of America’s Chinese Exclusion era on her family.  More topical than ever, Lowe offers a nuanced, engaging approach to the debate that details the long-term, multi-generational effects of ethnically motivated immigration policies while imparting a cautionary tale of living with cultural pluralism in the 21st century.

This is a story about familay and identity, mothers and daughters, being immigrant and being American.  Felicia Lowe will answer questions about the film following the screening.