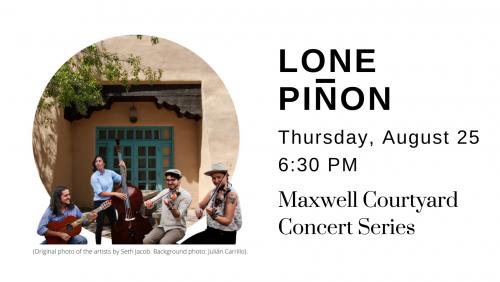 For more info. about the concert series visit: https://bit.ly/Maxmusic

Come experience the dynamic, time-honored songs and melodies of Lone Piñon, at the Maxwell Museum's courtyard...and bring your dancing shoes!

Lone Piñon is a New Mexican string band, or “orquesta típica”, whose music celebrates the integrity and diversity of their region's cultural roots. With fiddles, upright bass, guitars, accordions, vihuela, and bilingual vocals, they play a wide spectrum of the traditional music that is at home in New Mexico.

The Norte has long been a crossroads of cultures, and centuries of intersecting histories, trade routes, migrations, and cultural movements have endowed the region with an expansive and rich musical heritage that weaves together Spanish, Mexican, Indigenous, European immigrant, Anglo-American, and Afro-American musical influences. The oldest strands of this tradition have survived in continuity, renewed by each new generation’s contribution to core style and repertoire that has been passed from musician to musician, in some cases over many centuries.

The musicians of Lone Piñon learned from elder musicians who instilled in them a respect for continuity and an example of the radicalism, creativity, and cross-cultural solidarity that has always been necessary for musical traditions to adapt and thrive in each generation. Through relationship with elders, study of field recordings, connections to parallel traditional music and dance revitalization movements in the US and Mexico, and hundreds of local and national performances, they have brought the language of the New Mexico orquesta típica back onto the modern stage, back onto dance floors, into a contemporary aesthetic/artistic conversation, and into the ears of a young generation.

This event is sponsored by the University of New Mexico (UNM) Maxwell Museum of Anthropology, UNM Art Museum, UNM El Centro de la Raza, and UNM Department of Anthropology. It is the second of three performances that comprise the “Maxwell Courtyard Concert Series,” a celebration featuring superb local and regional artists. Join us for the free concerts as we transform our intimate courtyard into a unique cultural venue. During these events, the Maxwell as well as its Museum Store will be open and light fare and refreshments will be offered.

*Tickets to each concert are free but limited to the courtyard’s capacity. Non-ticketed audience members can still enter the museum, visit the store, and enjoy the music; however, non-ticketed folks will have to sit/stand/dance in the portal and garden, located directly East outside of the gates of our courtyard*