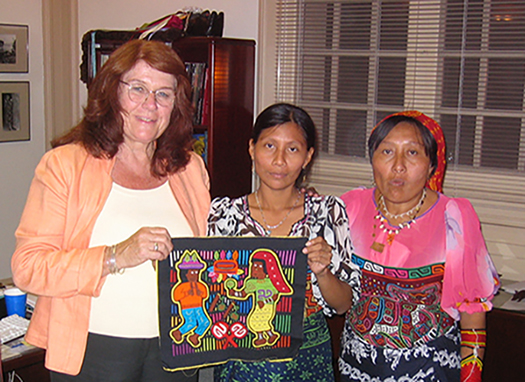 Dr. Mari Lyn Salvador (1943-2017) was curator of ethnology and chief curator in the Maxwell Museum of Anthropology from 1978 to 2005. During that time, she also held a tenured position in the Anthropology Department. A pioneering anthropologist in museum-community collaborations, she  curated several major exhibitions in the Maxwell and nationally, and was a leader in the developing specialization of museum anthropology within the larger discipline.

Dr. Salvador’s dedication to museums is embodied by her diverse leadership positions at the Maxwell Museum and at the San Diego Museum of Us (formerly the Museum of Man) and the Phoebe A. Hearst Museum of Anthropology at the University of California, Berkeley. In each of these institutions, she inspired public engagement with museums by developing exhibits that were both engaging and scholarly and worked to improve collection stewardship and repatriation. She fostered a vision of museums as welcoming spaces where significant collections from communities throughout the world would be preserved, studied, and exhibited. She achieved this vision through her commitment to community collaboration, co-curation, cultural and academic humility, and reverence for art and artists from all over the world.

Her initial work in Panama began in the 1960s, where as a Peace Corps volunteer she gained a profound appreciation of the artistry and aesthetics of the Guna (also spelled Kuna, Cuna) people of the San Blas Islands. There she worked with women mola makers to create an artists’ cooperative in support of economic security and artistic autonomy that continues to this day. Her Guna work became the focus of her doctoral studies in Anthropology at UC Berkeley. Her first major publication, in 1976, presented her Guna research in an edited volume that became a critical source in the developing field of ethno-aesthetics, in which she became a leading scholar. Her focus on Indigenous peoples’ self-representations about their aesthetic concerns has become a touchstone in the study of Indigenous arts.

During her research she built an important collection of molas for the UCLA Fowler Museum of Cultural History. This became foundation of her exhibition and book The Art of Being Kuna: Layers of Meaning Among the Kuna of Panama, published decades after her original research. This exhibition toured nationally, traveling to the National Museum of the American Indian in New York and the Field Museum in Chicago. Dr. Salvador also conducted research in Portugal, where she studied and published on religious celebrations or festas. Later, she worked with contemporary Hispanic artists in New Mexico to document and exhibit religious santos imagery, forming a significant collection of these for the Maxwell Museum.

A major concern of her research and exhibition projects was an emphasis on collaboration. Recognized as a national leader in Museum Anthropology, she assumed the presidency of the Council for Museum Anthropology, a section of the American Anthropological Association, in from 2003-2005. With her emphases on community collaboration and co-curation she prefigured what has become the dominant concern in museum practice of the late twentieth and twenty-first centuries.

That prescient vision led to the founding of UNM’s Alfonso Ortiz Center of Intercultural Studies, a collaborative effort between the Department of Anthropology and the Maxwell Museum of Anthropology.  Together with her Department colleague Sylvia Rodriguez, in 1999 Dr. Salvador authored the National Endowment for the Humanities Challenge Grant that established the Center to honor their late colleague Alfonso Ortiz, and raised funds for its endowment. Alfonso Ortiz, a member of the Pueblo of Ohkay Owingeh, Professor of Anthropology at the University of New Mexico, and a MacArthur fellow, believed that scholarship about American Indian people should not be limited to universities and academics, but that members of Indian communities should undertake it as well. The purpose of the Center is to support and foster community, collaboration in humanities programs of public scholarship and collaborative stewardship. This year the Ortiz Center celebrates its twentieth anniversary.

Mari Lyn Salvador’s legacy runs deep, both at the institutions she led and in the contemporary approaches she helped to configure in Museum Anthropology and Indigenous and global arts. At the University of New Mexico, her legacy endures in the Mari Lynn Salvador Fund for Museum Studies , an endowment established in her name that provides support for research, internships, travel and community collaboration to students in the UNM Museum Studies Program.

Salvador, Mari Lyn (ed.) The Art of Being Kuna: Layers of Meaning Among the Kuna of Panama. Berkeley: University of California. 1997.