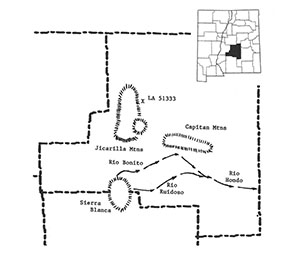 Prior to 1950, archaeological work in the Sierra Blanca country of Lincoln county and in the

northern part of Otero county in New Mexico was minimal and of small scale. Although Lehmer

culture, subsequent work in the foothills east of Sierra Blanca has shown that the prehistoric

manifestation he called the El Paso phase, derived from villages adapted to the desert basins west

of the mountain chain that includes the Sierra Blanca.

of excavation and some survey along the drainages in the eastern foothills of Sierra Blanca. TTC

of Corona. In her dissertation, Jane Kelley (1966) defined the Corona and Lincoln phases for the

northern part of the region (the Rio Bonito north to Corona), providing archaeologists with a

southern Plains and those of the Southwest.