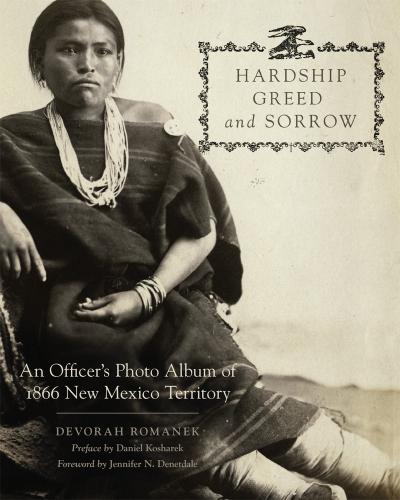 When:
Saturday, October 5, 2019 - 1:00pm
Where:
Maxwell Museum of Anthropology
Cost:
Free and Open to All
Presenter/s:
Devorah Romanek

In the aftermath of the Civil War, New Mexico Territory endured painful years of hardship and ongoing strife. During this turbulent period, a U.S. military officer stationed in the territory assembled an album of photographs, a series of still shots taken by one or more anonymous photographers. Now, some 150 years later, Hardship, Greed, and Sorrow reproduces the anonymous officer’s “souvenir album” in its totality.

Offering an important glimpse of the American Southwest in the mid-1860s, the book opens with a thoughtful foreword by Jennifer Nez Denetdale, who considers the varied and lingering effects that settlement, conquest, and nineteenth-century photography had on the Apaches and Navajos. In her insightful introduction accompanying the photographs, curator and scholar Devorah Romanek places the photographs in historical context and explains their unusual provenance. As she points out, the 1866 album integrates a number of important themes in connection to the Civil War and Reconstruction periods, including the French intervention in New Mexico and the internment of Navajos at the Bosque Redondo Indian Reservation.

The story of the album’s provenance reads like a mystery: some loose ends remain untied and some questions remain unanswered. In addition to containing what may be the earliest extant photographs of Navajo Indians, the album features both studio and field images of U.S. Army officers, Mexican politicians, and various sites throughout New Mexico. According to Romanek, a number of the album’s photographs have appeared in other publications but with scant attention to their original context or purpose.

This compelling book reveals what we know about the collection, its compiler, and the photographer—or photographers—who captured such a fraught and complex moment in the history of the American Southwest.

About The Author
Devorah Romanek is an anthropologist and art historian and Curator of Exhibits at the Maxwell Museum of Anthropology at the University of New Mexico.
Daniel Kosharek is retired as Photo Curator at the New Mexico History Museum, Palace of the Governors, Santa Fe.

Jennifer Nez Dennetdale is Associate Professor of American Studies at the University of New Mexico and the author of Reclaiming Diné History: The Legacies of Navajo Chief Manuelito and Juanita.