In Memory of Lou Schuyler 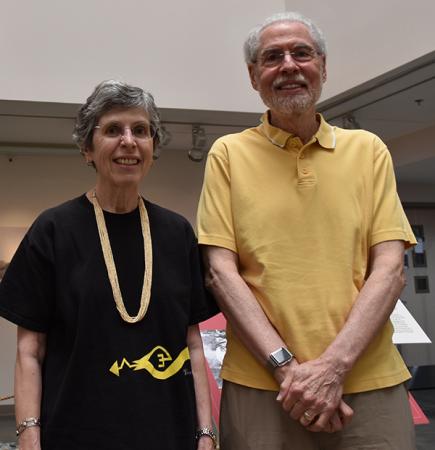 The Maxwell Museum of Anthropology mourns the passing of Lou (Lucy) Schuyler, long-time volunteer, donor, avocational archaeologist, and dear friend to many in our museum community.

The daughter of a factory worker, Lucy C. (“Lou”) Schuyler attended Brown University on a mathematics scholarship and went on to obtain an M.A. in systems engineering. Lou then served as an analyst and consultant for IBM, as the information officer for a major publisher, and as an independent consultant. After retiring from successful careers in New York, Lou and her husband Hank Schuyler relocated to Albuquerque in 2004. Pursuing a lifelong interest, Lou joined several local archaeological societies. She also began doing volunteer work for the Maxwell Museum of Anthropology. She continued this work for 17 years, until a sudden onset of cancer.

Lou’s professional career prepared her well for dealing with difficult and sometimes confused data sources. Her first task at the museum was to create and populate a preliminary spreadsheet database for the Tijeras Pueblo collections being reorganized by a volunteer crew. She repeated this task during the volunteer-based reorganization of the Pottery Mound collections. She then began working with field and laboratory notes and collections records to create descriptive reports on unpublished legacy projects. Several of her reports reflect her interest in Native American jewelry. Before becoming ill she completed the draft of her final series of reports, providing a room-by-room description of the 1970s field school excavations at Tijeras Pueblo. Parts 3 through 6 of that report are currently being edited for publication.

2013       A Guide to Collections and Proveniences for Pottery Mound. Technical Series No. 20.

The following publication is part of an upcoming special issue of Kiva.

2022       The Jewelry of Tijeras Pueblo. In Tijeras Pueblo at the Crossroads, edited by J. A. Habicht-Mauche and S. Arazi-Coambs. Kiva. [Under review]

To Make A Gift in Honor of Lou Schuyler

Several of Lou’s friends have asked how to make a gift to the Museum in her honor.  We suggest you consider a gift to the Maxwell Museum’s Sargeant Fund, administered by the UNM Foundation, supports curation work on the Museum's Southwest Archaeology collections.

To make a gift by mail, please send your donation to

Maxwell Museum of Anthropology
MSC01 1050
1 University of New Mexico
Albuquerque, NM 87131
Checks should be made out to the “UNM Foundation”
In the Memo Field please note the following:  “Index 937134, In honor of Lou Schuyler”
To make a gift online,  go to https://www.unmfund.org/fund/sargeant-fund/
Under comments, please note that the gift is in honor of Lou Schuyler, with any additional comments you would like to provide – including asking that an acknowledgment be sent to Hank.