Transformations and a Buddhist image in the Maxwell Museum Collections 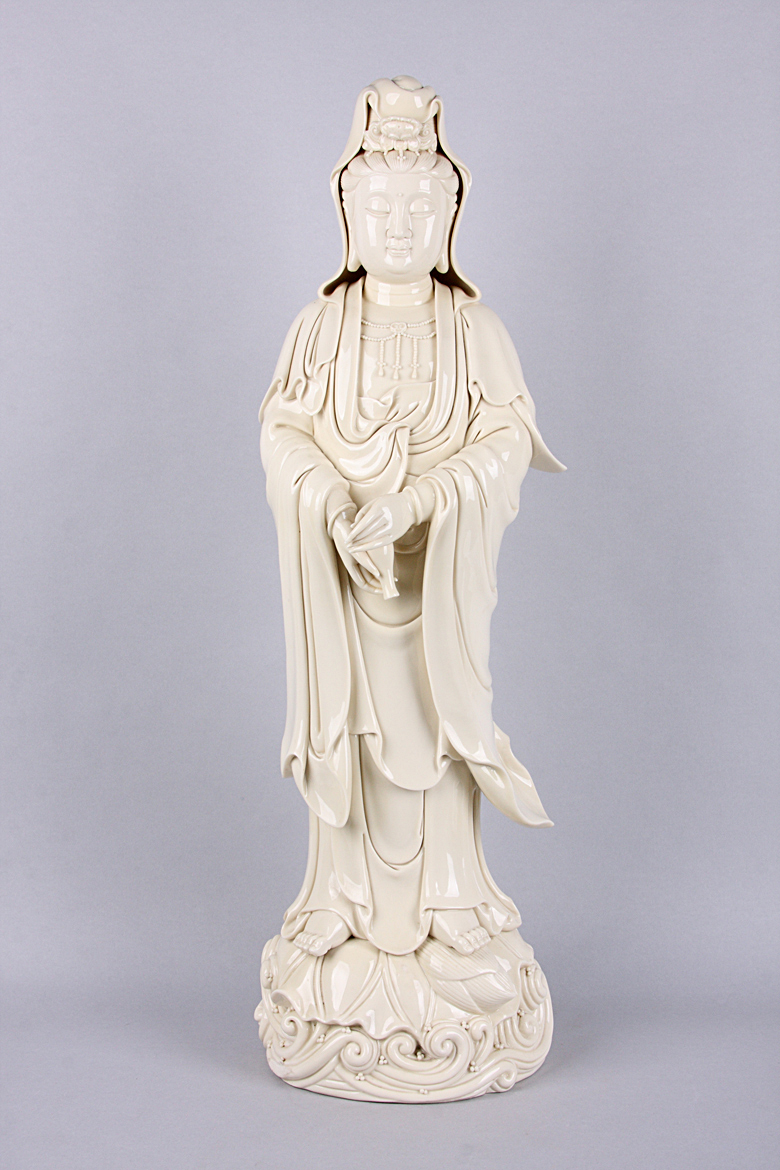 In the basement storeroom that holds the pottery collections of the Maxwell Museum of Anthropology rests a large white porcelain sculpture, which had been exhibited in the 2016 exhibition Earth, Fire and Life: Six Thousand Years of Chinese Ceramics. This late 19th-early 20th century image is one of thousands made in China of Guanyin (Kuan-Yin, Kuanyin), the “Goddess of Mercy.”

Guanyin did not begin as a goddess. Nor did her story start in China. Instead, her journey began with the rise of Buddhism in India in the late centuries BCE. There, the figure who would become the goddess Guanyin originated as the male bodhisattva of compassion, Avalokiteśvara, literally “the lord who looks down.”

The story of Avalokiteśvara’s journey from India to China and transition from male to female lies in the larger story of the spread and transformations of Buddhism, as it was adopted throughout Asia. It is the story of the gender fluidity of the bodhisattva of universal compassion, who could take any form required to best serve those in need. In the context of Pride Month, we explore this journey as it is revealed in a single object in the Maxwell’s collections.

Who is Bodhisattva Avalokiteśvara? Bodhisattvas are people on the path to Buddhahood who elect to remain in the world to work for the well-being of others. People who commit to the bodhisattva path take on long and arduous obligations. A few come to be recognized as particularly powerful and important. Avalokiteśvara, regarded the perfect embodiment of compassion, is one such bodhisattva. He became a widespread focus of devotion in India starting in the early centuries CE and his popularity spread as Buddhism was adopted across Asia.

A chapter of the Lotus Sutra, one of the core texts of Mahāyāna Buddhism, is devoted to Avalokiteśvara. He is described as one who hears cries of suffering and rescues those who call him from harms, such as shipwreck, fire, flood, murderers, ghosts, bandits, and fierce animals. It is not surprising then that he was recognized as an important patron to travelers, merchants, and pilgrims. Avalokiteśvara also provides sons to the childless and protection to women during pregnancy and childbirth. To accomplish his work, Avalokiteśvara takes on many forms—human or non-human, male or female—appearing in the physical form that will be best accepted by the person in need. 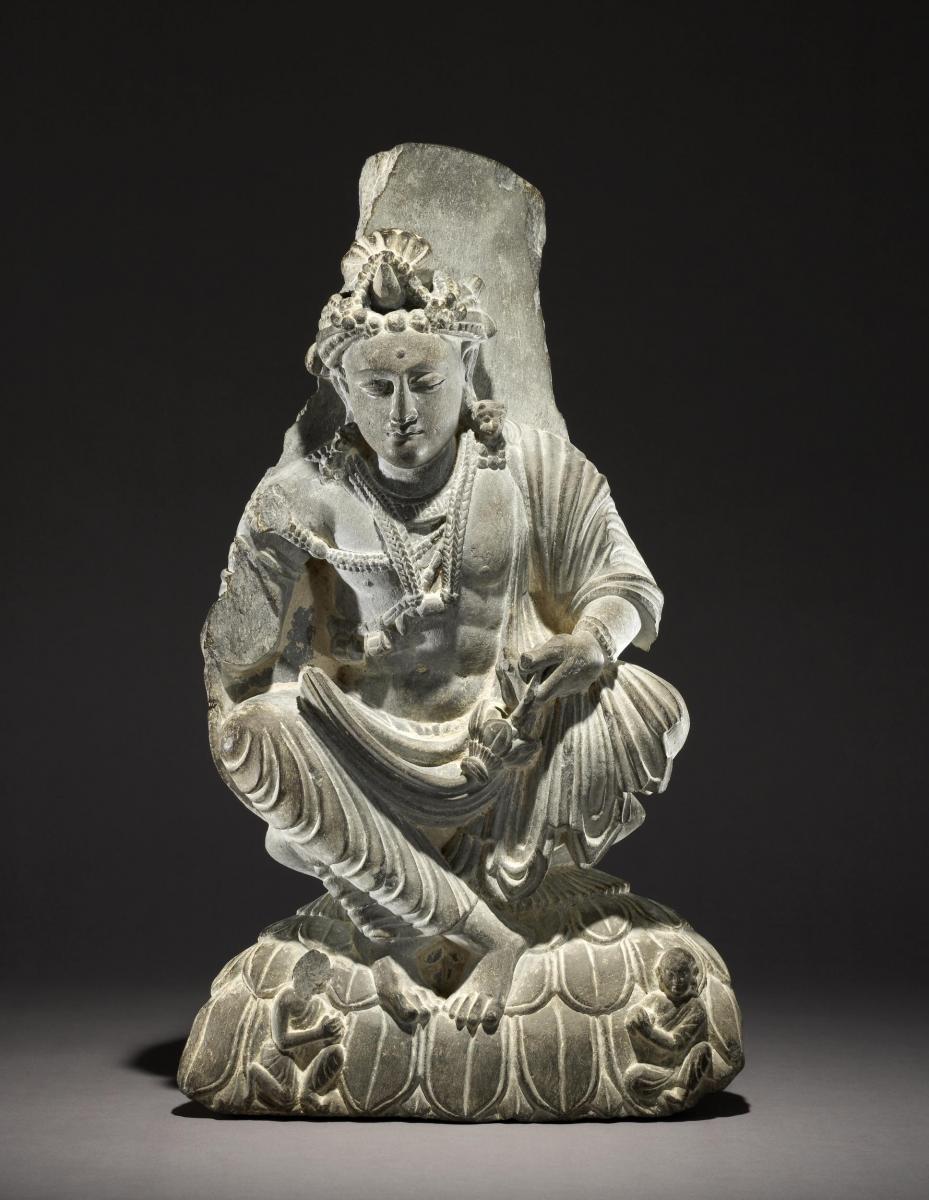 Images of Avalokiteśvara were made and worshipped throughout India from the early centuries BCE.  They took a variety of forms that varied over time and space and in response to the expanding textual sources that recount his story. Some depict Avalokiteśvara as a seated princely figure garbed in elegant robes. Others show him as a barely clothed ascetic. Others depict him in various manifestations, including with 11 heads and up to 1000 arms to aid in his efforts to save all from suffering. All show him as male. 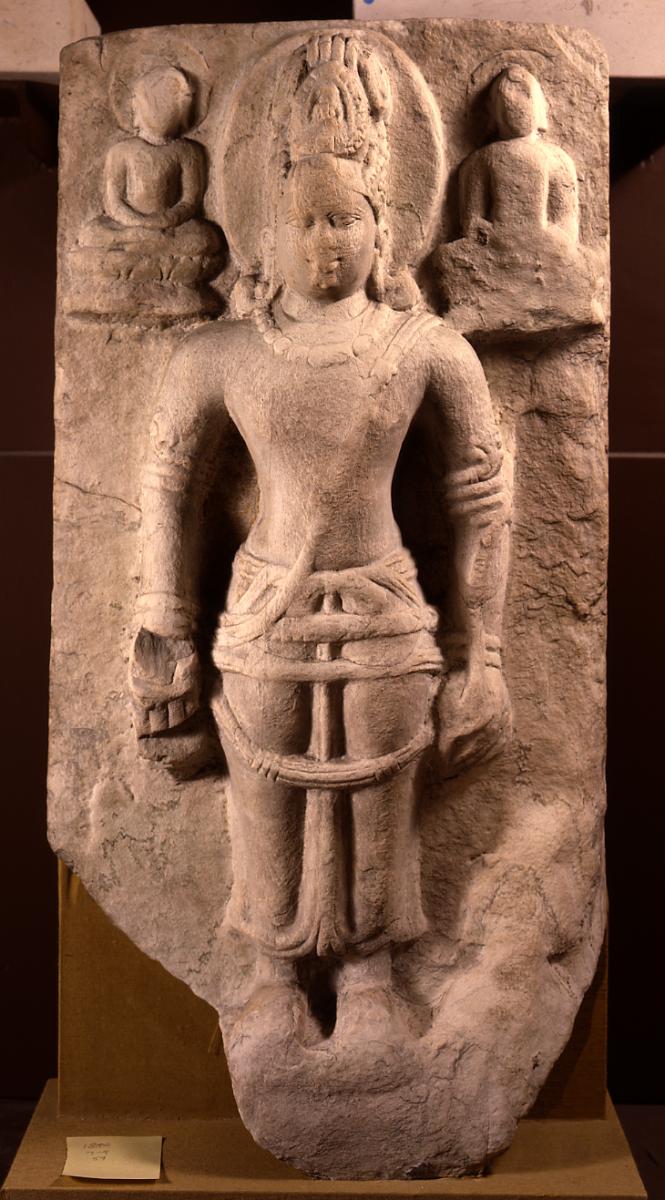 From its origins in India, Buddhism soon spread throughout Asia – to Sri Lanka, Tibet, and East and Southeast Asia. Avalokiteśvara traveled too, taking on new associations, attributes, and stylistic depictions along the way. Called Guanyin (or Guan-shih-yin) in China, Quan-am in Vietnam, Khwanse’um in Korea, Lokanat in Myanmar, Chenrezig in Tibet, Natha Deviyo in Sri Lanka, Lokesvara in Myanmar, and Kannon or Kanzeon in Japan, the worship of Avalokiteśvara was widely adopted and adapted to local needs. 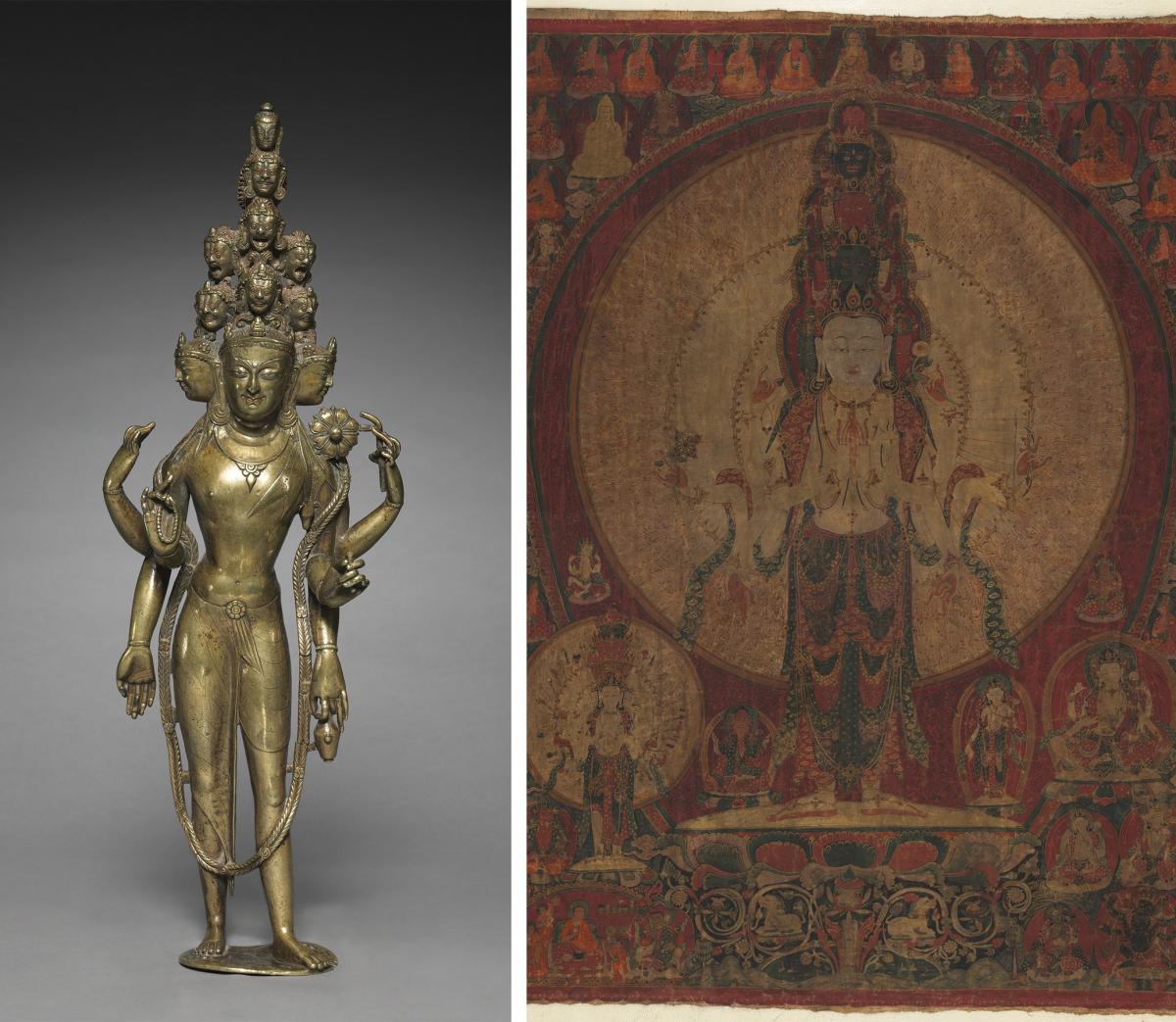 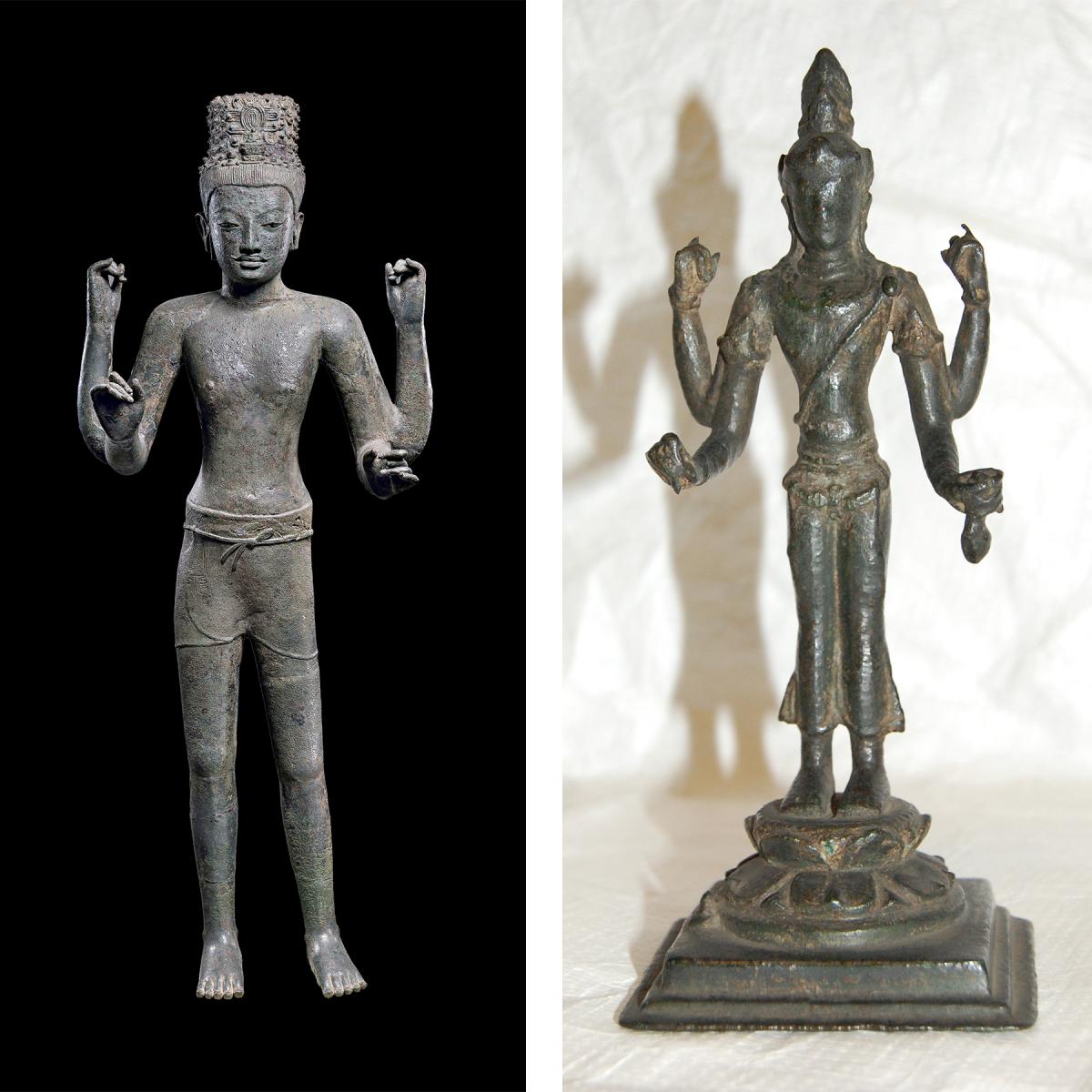 Buddhist beliefs and monks arrived in China along the Silk Route during the late Han Dynasty (202 BCE-220 CE). There, Avalokiteśvara was called Guanyin (“Perceiver of Sounds”) or Guan-shi-yin (“Perceiver of World Sounds”). While Guanyin was initially depicted as male, over the succeeding 1500 years the female form came to dominate. Historian of Buddhism Chün-Fang Yü has written extensively on Guanyin’s transformation from his/her early male form to the “Goddess of Mercy,” the most popular Buddhist deity in China. She describes this transition as the outcome of a 1000-plus year process of indigenization and popularization of Buddhism in China—connected to larger religious and political developments, emergent goddess cults, and the bodhisattva’s widespread popularity and accessibility to elites and non-elites of all genders for the protections she provided and the male heirs she helped produce. 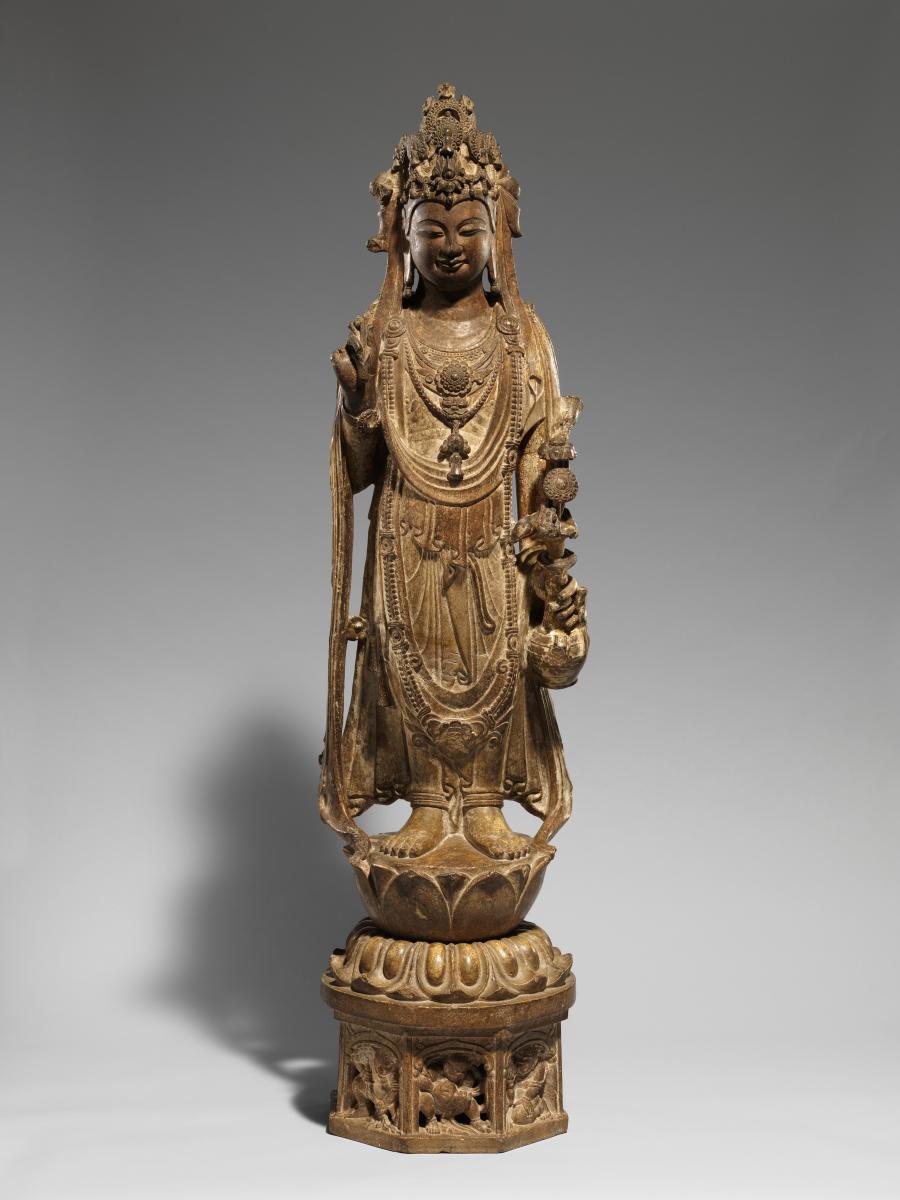 In early Chinese representations, Guanyin was depicted as male. By the Song Dynasty (960-1279 CE), some depictions of Guanyin show more ambiguous features –with attributes reflecting both male and female artistic conventions. 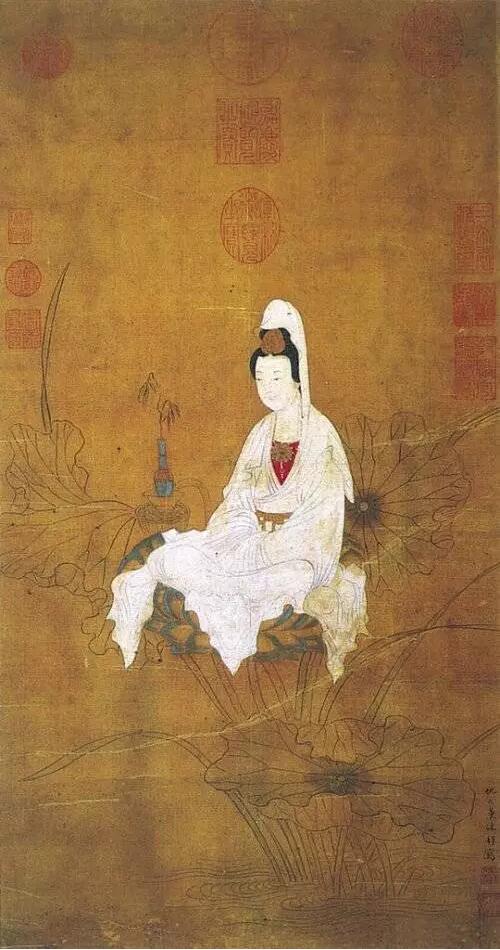 And in the succeeding Yuan and Ming periods, depictions of Guanyin as a Goddess were dominant, though they never fully replaced gender-ambiguous or male gendered depictions.  Two forms of Guanyin—White-Robed Guanyin and. later, Child-giving Kuanyin—became the most common forms in which she was worshipped.

White ware porcelain figurines of Guanyin began being produced in the kilns of Dehua in Fujian Province the 16th century (Ming Dynasty), produced for imperial and non-elite households, shrines, and temples.  Images of Guanyin also traveled to the Americas with Chinese immigrants in the 19th century. 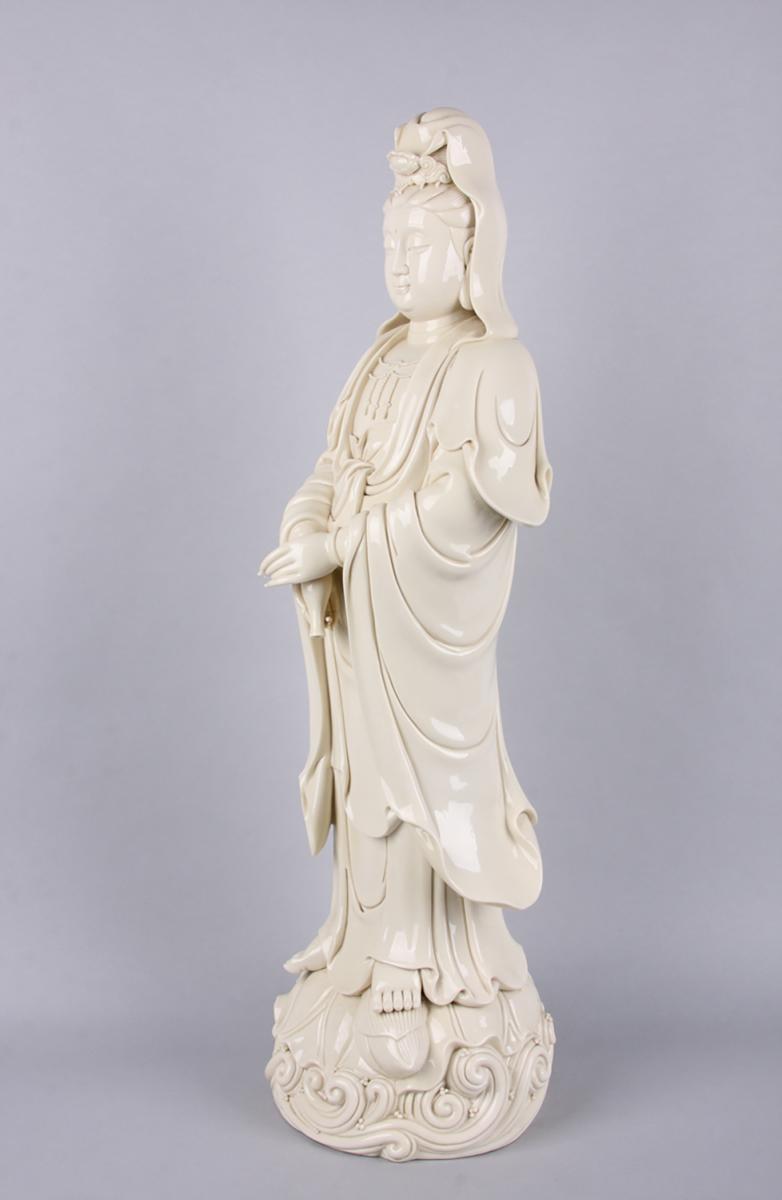 Today, Avalokiteśvara/Guanyin continues to be among the most honored deities in the Buddhist world (the Dalai Lama is recognized as Avalokiteśvara). Guanyin has been adopted broadly by Western Buddhists, including by feminist and other-gendered devotees. As Hsiao-Han Lu has written: “For ethnic, gender, and sexual minorities … Avalokiteśvara’s act of taking various forms without discrimination is a validation of the embodied existence of ethnic, gender, and sexual difference,” while simultaneously signifying the transcendence of the constraints of fixed identities.

The gender fluidity of Avalokiteśvara/Guanyin, and the bodhisattva’s ability to take a diverse, inclusive, range of gendered (and non-gendered) forms to fulfill their commitment to provide compassion to all sentient beings allows museums like the Maxwell to present this single artifact in ways that challenge simplistic binary gender narratives and welcome all into the Museum.