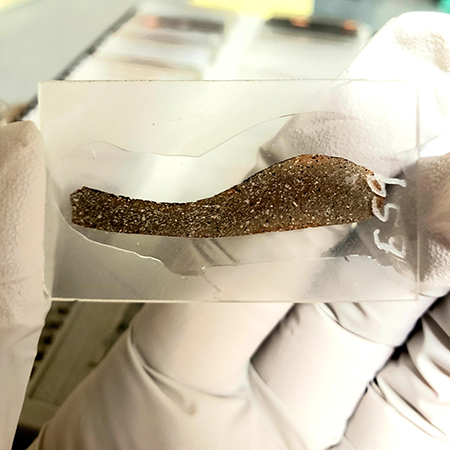 Archaeological research is constantly evolving and changing. As new technologies are developed (often in the physical and chemical sciences), archaeologists are gifted with new and exciting tools with which to explore the past. The development of new techniques means that questions that once seemed unanswerable can now be addressed. A large collection of ceramic sherds from San Marcos Pueblo (AD 1250-1680) demonstrates how objects in museum collections can be studied over and over again, year after year, as new scientific techniques coupled with new research questions and perspectives allow archaeologists the possibility to further uncover the hidden secrets of the past from the material culture left behind.

The San Marcos collection was brought to the Maxwell Museum in the late 1990s and early 2000s by Dr. Ann Ramenosfky (UNM Professor emerita of Anthropology), from her UNM archaeological field schools at the site. Over 60,000 ceramic sherds from that work are now in the Museum’s collections. These sherds do not simply sit gathering dust, but have been the focus of numerous research projects undertaken by archaeologists keen on understanding the history and peoples who lived and worked at San Marcos Pueblo.

Dr. Jennifer Boyd Dyer’s UNM doctoral dissertation examined a distinctive hybrid ceramic ware —colono ware—to determine the extent to which cultural resilience, disruption, and/or innovation characterized the early interactions between Spanish colonizers and the native Puebloans of San Marcos (Dyer 2010).  Colono wares include a range of low-fired earthenware ceramic vessels made by Indigenous potters in forms that reference European ceramic types (e.g., soup plates, candle sticks, teacups, etc.). Dyer studied pre-colonial and colono ware collections from San Marcos and other sites, documenting forming techniques and raw material selection and preparation. She used petrographic, macroscopic and chemical (Instrumental Neutron Activation) techniques to ask: who made these distinctive vessels; and whether Indigenous potting communities showed evidence for continuity from pre-colonial practices or was there dramatic disruption? Her analyses revealed striking continuities in local and regional potting techniques and raw material selection, pointing to the persistence, resilience, and creativity of Pueblo potters over the first two centuries of colonization.

Also completed in 2010, Dr. Kari Schleher’s (now, the Maxwell’s Curator of Archaeology!) doctoral dissertation examined pottery from the San Marcos collection to examine how pottery production in the Galisteo Basin was organized and how it changed through time. She was particularly interested in whether Glaze Ware pottery making at San Marcos was the domain of specialists; and if so, in considering the impact of specialization on the standardization of ceramic materials, forming techniques, and vessel forms.

The first technique she used was petrographic microscopy. While petrography has been used in archaeological research since the 1930s, newer “high-tech” approaches allow for a more detailed and careful analysis of ceramic sherds. Petrographic analysis uses very thin slices of sherds (or “thin sections”) that are cut and ground to create a flat surface that is attached to glass slide. The slices are then viewed under a special polarizing microscope that allows rock, mineral and organic inclusions in the ceramic body to be identified and quantified (Stoltman 2001). Using the thin sections, Schleher also employed a technique known as electron microprobe analysis (EMPA). EMPA provides information about the chemical composition of minerals by using narrow electron beams to stimulate the emission of x-rays. While the electron microprobe was developed in the 1960s, researchers are still discovering its applications to archaeology (Ionescu 2016).

The use of these techniques allowed Schleher to document the geological and chemical components of hundreds of individual sherds. Knowing the individual makeup of each ceramic sherd allowed Schleher to examine how they fit into a large pattern of standardization, specialization, and ceramic production at San Marcos Pueblo. Her work revealed little evidence for increasing standardization over time, but did suggest that San Marcos potters were making pottery for export to other Rio Grand pueblo communities. It also revealed remarkable continuity in pottery production throughout the entire three-plus century Glaze Ware sequence.

The story of these San Marcos sherds does not end with the completion of Schleher’s doctoral research.  After she finished her research, the sherds and thin section slides were brought to the Maxwell Museum to be reunited with the other San Marcos materials and available to future scolars. A student research assistant made sure that thin section and the sherd it was made from (or “voucher sherd”) were accounted for. Each thin section was given a catalogue number which corresponded to its voucher sherd and both were housed together, ensuring that future archaeologists could use them in their research projects, using newer technologies and asking different questions.

And that is exactly what is going to happen. In February of 2021, the sherds and slides were pulled from their resting place in the Maxwell Museum basement for another scholar to conduct new analysis to answer more questions about San Marcos Pueblo.

With each new technique, and each re-examination of old collections, our understandings of the past becomes clearer. From its initial collection by Dr. Ramenofsky in 1990, to Dyer and  Schleher’s analyses a decade later, to the next phase of research in 2021, the San Marcos collection will continue to be a source of knowledge for years to come. With each new technological advancement, these 60,000 sherds will have more stories to tell, for archaeologists to uncover.

Stoltman, James B. 2001. “The Role of Petrography in the Study of Archaeological Ceramics.” In Earth Sciences and Archaeology, edited by Paul Goldberg, Vance T. Holliday, and C. Reid Ferring, pp. 297–326. Springer US, Boston, MA.